Bidding farewell to Fownhope: Firefighter Dave is calling it a day after 30 years service 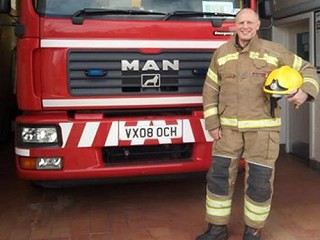 On-call firefighter Dave Pascoe from Fownhope station is hanging up his boots and helmet after a 30-year firefighting career.

Dave, who is 65, joined Hereford & Worcester Fire and Rescue Service in 1990, and since then firefighting has seen him tackle every conceivable kind of fire and incident.

Married to Jackie, they have two grown-up children, Mark and Alison. Originally from Wales, Dave has lived in the Hereford area for many years.

Serving with his local station at Fownhope throughout, Dave was encouraged to join the Fire Service by local farmer friends although ironically there was a serious fire at his own place of work after he had joined.

Training complete, Dave soon found himself called out to building, farmhouse and factory fires all around Fownhope and Hereford, as well as floods, road accidents and rescues.

Life has always been hectic as Dave has fitted firefighting round his full-time day job as a team leader with Avara Foods in Hereford, where he has worked for just short of 40 years.

Naturally, with the Coronavirus situation, he currently has his hands fuller than ever helping provide urgently needed food supplies to the supermarkets.

Life as a firefighter was very varied and no two call-outs were the same, as Dave explains: “You never knew what to expect and it’s an unpredictable world. I’ve really enjoyed it even though some of the fires I attended were very big, and since Fownhope station is closest to Hereford, we’re the first appliance to be called in when extra appliances are needed.

“One of the biggest fires I dealt with was at the Hereford United football ground in 1995 when the ‘Sportsman's Club’ was destroyed in an arson attack. When we got into the building to tackle the fire we had a feeling that something really bad was about to happen – difficult to define but somehow the crackling noise sounded different – we got back out really fast and seconds later the ceiling caved in.

"Perhaps it was experience or a firefighter’s instinct."

Other call-outs had their funny side, though, as Dave explains: “Once we were called to a cat stuck up a tree, and we just couldn’t get it to come down, until someone had the bright idea to use the hose on low pressure – it didn’t look too bothered I’m glad to say!

“Another time in Fownhope itself, just near the fire station, we got called to a house where the living room fireplace had got out of control. We were spraying at the fire and couldn’t understand why it wasn’t going out.

"Eventually we realised that there was a glass screen in front of the fireplace that we couldn’t see in the smoke, and it was blocking the water! Fortunately we got the fire out at last.

“But, on the whole, I acquired a reputation for keeping fires away – they always seemed to happen when I went on holiday, so colleagues thought I brought them good luck.

“Like all professions, firefighting has changed dramatically but the basic role is the same – to save lives and property.”

Away from the fire service and work, Dave never seems to sit still.

He keeps in peak condition as a ‘park runner’, clocking up nearly 190 5k circuits to date all over Herefordshire, and for some time was a keen cricketer with Brockhampton then Fownhope's ‘Strollers’ club. He has also amassed an impressive collection of firefighter figurines from around the world.

Awarded the Queen’s Long Service and Good Conduct Medal after 20 years of service, Dave does not plan to slow down for quite a while.

Besides the ‘day’ job, he intends to carry on with park runs and enjoy some well earned holidays, although like for everyone else, these will not be happening for a while. And even then, they’ll probably be in Fownhope caravan park – Dave’s idea of holiday heaven!

Dave says his farewell party is also on hold, but what matters more is his colleagues’ welfare as they take on extra duties during the pandemic: “I wish everyone the best of luck and keep safe.”

Thanking Dave for his long service, West District Cluster Manager Station Commander Adrian Thompson said: “Dave has given dedicated service during his 30-year firefighting career, saving lives and property on countless occasions. That he has done this alongside a busy full-time job and family life, like all on-call firefighters, is even more creditable.

"We wish him and his family the best of luck and success in the new challenges he’ll undoubtedly take on.”