Fire Service warns: don’t take your BBQ on a picnic 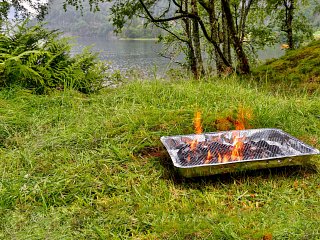 Hereford & Worcester Fire and Rescue Service (HWFRS) has seen an increase in the number of fires in the open in the last few weeks and is warning people against taking BBQs on picnics.

Discarded disposable BBQs were the cause of some of the 792 fires in the open that HWFRS attended in the 12 months to March 2019 – and of many others throughout the UK.

“We want to make taking a portable BBQ on a picnic socially unacceptable, as the consequences could be devastating,” said Station Commander Amy Bailey.

“Before the warm summer weather returns we want to encourage people to leave their BBQs at home if they’re going on a picnic, as there is no completely safe way to dispose of it whilst out in the countryside.

“Last year’s major fire on the Malvern Hills which burned for many days was caused by a discarded disposable BBQ, risking life, property, wildlife, crops, meadows, moorland and woodland,

“Pouring water on to a portable BBQ or open fire and walking away is not safe as the tray or stones are red hot and, unseen, may already have scorched the ground beneath which can then spread through grass and crops. Every year fire destroys thousands of acres of countryside and wildlife habitats.”

HWFRS is also warning against the use of Chinese lanterns which can cause wildfires, as well as pain and suffering to livestock and wildlife.

To enjoy the countryside safely, consider this advice: