HWFRS assists with massive operation at Whaley Bridge in Derbyshire 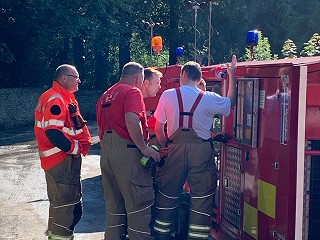 A Hereford & Worcester Fire and Rescue Service crew from Kidderminster with a high volume pump travelled to Derbyshire on Thursday evening to assist with rescue operations as the dam at Toddbrook Reservoir threatened to fail.

The crew, under Station Commander Lee Watson, joined personnel from a number of other services in an attempt to reduce the water level in the reservoir and reduce pressure on the dam.

The deployment was part of a national, co-ordinated response featuring a number of agencies.

Operations continued through the weekend and into Monday, when SC Watson returned to base to be replaced by Group Commander Stuart Crebbin.

A relief crew is heading up to Derbyshire today to take over from the original crew who have been doing such excellent work since last Thursday.