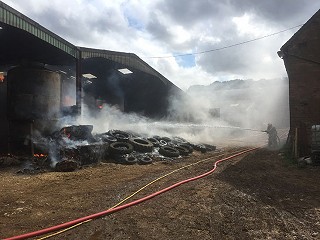 Eight fire engines from Hereford & Worcester Fire and Rescue Service were called to an agricultural building fire at Lower Rochford near Tenbury Wells on Sunday 11 August at 14:10.

Two of the appliances came from Leominster with one each from Tenbury Wells, Leintwardine, Malvern, Bewdley, Stourport and Bromyard and they were assisted by a Shropshire Fire and Rescue crew from Cleobury Mortimer.

The fire was in a four-bay barn, measuring 20m by 50m, and involved 100 tonnes of silage, 60 tonnes of straw, tyres and asbestos roofing.

At its height, four jets, two breathing apparatuses, a foam jet and a water monoitor were used in fighting the fire.

There were no casualties and the police were also in attendance.

Although activity was scaled down, one pump remained on site through the night and a crew was still at the scene, dampening down, at 15:30 on 12 August.