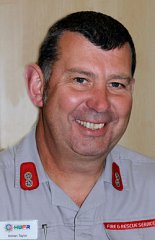 Ade joined the Service in 1993 as a retained firefighter and following wholetime recruitment in 2003, now works as a Watch Commander with Blue Watch in Redditch. Previous to his current appointment he was responsible for Arson Prevention across the whole of Herefordshire and Worcestershire.

Ade's award, for services to the Fire Service and the Young Firefighters Association (YFA), is included in the Queen's Birthday Honours List, published today, Saturday June 16.

In 2000, while working as a retained firefighter, Ade was instrumental in setting up a branch of the YFA within the Service area. Thanks to his efforts, a YFA group was started in Droitwich and has been thriving ever since. Ade is the driving force behind not only the YFA in Droitwich, but has also co-ordinated the YFA for the whole Service, with a second YFA group now successfully established at Redditch.

Each year the local YFA attend over 50 events across the two counties, where the young people contribute to safety initiatives, open days, civic events and a variety of community days.

Each of these initiatives and activities are carried out in Ade's own time and over the last 10 years he has devoted literally thousands of hours of his own time to the development of young people through the YFA. The annual YFA camp is a great example of this. Each year, for the past ten years, he organises and leads a camp in the Forest of Dean, a week where all (up to 40) YFA members have the opportunity to take part in a range of outdoor pursuit activities. He has used his own annual leave allocation to do this, supported by his wife Sue, and close family.

He never turns away a potential YFA recruit and over the years has encouraged many disadvantaged young people to get involved (including those with physical disability, low self esteem, victims of bullying, etc). Ade is supported by a team of YFA instructors who he has trained, again in his own time, including members of his own family.

Chief Fire Officer Mark Yates from HWFRS said: "Ade Taylor is quite simply the heartbeat and life blood of our Service's YFA scheme and he has had a profoundly positive impact on dozens of young people as a result. His selfless enthusiasm and drive is exceptional and is a huge credit to the Fire Service, the communities he serves and ultimately himself.

"I am delighted that Her Majesty has chosen to honour Ade in this way, and I know that I speak for everyone who knows him when I say that he thoroughly deserves this recognition."

Watch Commander Ade Taylor will be invited to receive his MBE at an awards ceremony later in the year.