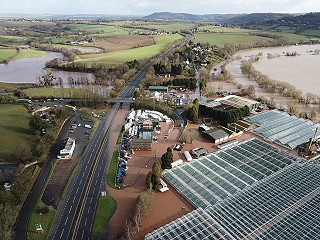 Twenty-four residents and eight staff have been evacuated from a care home in Whitchurch, near Ross-on-Wye.

The multi-agency response included Hereford & Worcester Fire and Rescue Service crews from Whitchurch, Ross-on-Wye, Hereford and Worcester as well as the Water First Responders team from Ross-on-Wye were called at 07:25 on 18 February and the evacuation operation has continued over several hours.

Superintendent Sue Thomas from West Mercia Police and on behalf of the Herefordshire’s multi-agency flood response, said: “The water levels rose higher than initially anticipated so we are working together with our emergency response partners to evacuate a care home in Whitchurch.

“Our absolute priority is their safety and the safety of the public, we will be moving them to a location where their care can be continued.”

She continued: “We would like to thank the local community and residents for their co-operation and their support in assisting the emergency services.”

“We are very grateful to the local community for the way in which they have rallied round and generously supported us as everyone is brought to safety,” he said.

CAPTION: Flooding in Whitchurch also caused the closure of the A40.