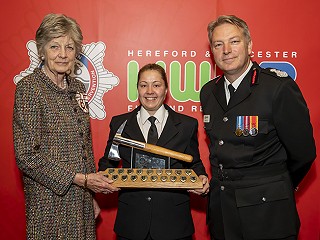 Chief Fire Officer Nathan Travis has expressed his pride in HWFRS as he presented awards at the Worcestershire annual Hereford & Worcester Fire and Rescue Service Medal and Awards Ceremony.

“I am immensely proud to be the Chief Fire Officer of a Service that has clearly demonstrated great resilience during a period of significant change and upheaval across the whole of the public sector,” he said.

“It is a Service whose people are determined to add extra value to their communities, whether it is through their skills and bravery, going the ‘extra mile’ or through their sheer dedication and commitment to their job.”

The medals and awards were presented by Lady Morrison - the deputy Lord Lieutenant of Worcestershire, Edward Holloway – the High Sheriff of Worcestershire, Roger Phillips – Chairman of the Fire Authority and CFO Travis. Group Commander Rob Allen was the Master of Ceremonies.

The event was attended by the recipients, their friends and families, Allah Ditta the Mayor of Worcester, Peter Tomlinson the chairman of Worcestershire County Council, fire officers from HWFRS and members of the Young Firefighters Association.

The Awards and Medals

Presented to the top on-call firefighter recruit of the year FF Rebecca Harding of Kidderminster.

In announcing the award, which was presented by CFO Travis, GC Allen said: “It was soon noticed that Rebecca gave maximum effort during the practical and technical training and showed a positive attitude in her efforts to succeed.

“She has shown great commitment to the Service and her team and acted selflessly in support of her peers.

“She is a good role model for what a new recruit firefighter should be.”
The Fire Brigade’s Long Service and Good Conduct Medal

The honour is awarded by Her Majesty the Queen to those who have rendered 20 years’ meritorious service as members of the Fire Brigades of the United Kingdom. The award indicates the high esteem in which the recipient is held and expresses the gratitude of both the Fire and rescue Service and public for their honourable duty.

Presented to fire service staff who have completed 30 years’ meritorious service as members of the UK Fire and rescue Service.

The awards were presented by the chairman of the Fire Authority and the Chief Fire Officer to:

This year the award was presented to:

Hannah Sinclair-Elechi. GC Allen commented in announcing the award that those making the nomination said this was the easiest decision they had ever had to make and that Hannah’s enthusiasm has shone through in everything that she does..

“The YFA is special to me because, before, I struggled with my confidence and it has really helped me with that,” said Hannah. “I didn’t know too many people before and it’s been helpful to have this family outside of where I usually am in Worcester. Being a member of the YFA gives us plenty of scope to do things, for example to go to open days around the fire stations, while I have even had the chance to drive cars and fire trucks which has been really exciting as well. I have worked really hard so it’s nice to have been recognised. I feel quite proud of myself and I know that my family are proud of me, too.”

Awarded by the CFO to members of the Fire Service, partner agencies or the public for acts of bravery or performing to a high standard under difficult circumstances or above and beyond normal expectations.

This year the certificates were awarded to:

Awarded by the Chairman of the Fire and Rescue Authority to members of the Service and members of the public for actions away from the operational arena.

This year the certificates were awarded to: