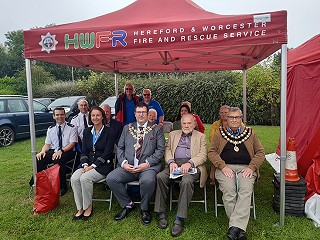 Schools from across Herefordshire attended the Dying 2 Drive event held at Leominster Police Station during the last week.

The impactful presentations, arranged by a number of partners including Hereford & Worcester Fire and Rescue Service, West Mercia Police, Herefordshire Council and the ELY Memorial Fund are aimed at students who will shortly be starting to travel independently or with other road users.

On Tuesday, as well as groups from Kingstone and Wigmore Schools, a number of local officials also attended.

The officials group was welcomed by Chief Fire Officer Jon Pryce and WMP superintendent Ed Williams who both emphasized the scheme’s value and importance.

The event began with a mock reconstruction of the aftermath of a road traffic collision where a drug driver from one of the vehicles is tested and arrested while the driver of the other vehicle has to be cut from her car by fire service personnel before being handed over to the ambulance service.

This is then followed by four workshops underlining the Fatal Four – Seatbelts, Speed, Distraction, and Drink or Drugs.

The event concluded with a powerful and emotional presentation from ELY founder Ange Tyler and her colleague Diana Wood who have both lost children in car crashes. They explained how these tragic events have had a life-changing effect on them and their families.