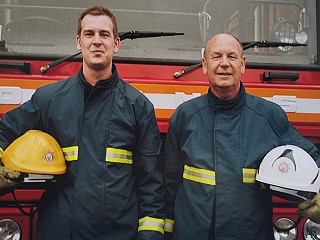 From an early age Hereford & Worcester Fire and Rescue (HWFRS) Station Commander Richie Young from Evesham knew he was destined to be a firefighter, following in the footsteps of his Dad Terry Young who served with HWFRS for 33 years.

Infact Terry has not only influenced Richie, who has been serving for 15 years, his older brother Clive is training to be a whole-time firefighter too at the age of 44 – a total potential change of career from being a HGV driver, proving that age is no barrier to applying to become a first time fire fighter.

Terry was Watch Commander at Redditch fire station before he retired from the service on 5 November 2008, three years to the day after Richie joined in 2005, on bonfire day of all days!

Richie has fond memories of spending much of his childhood following his Dad around Redditch fire station. He said: “I used to spend hours at the station watching what the crew did and pretending that I was one of them. I knew that as soon as I turned 18 I would join the fire service. Now my daughter Hannah who is only four seems to have inherited my interest and loves coming to the station with me.

“I can clearly remember one of the first incidents I was called out to with my Dad, once I qualified. We were called out to a large flat fire in Feckenham. As an inexperienced 19-year-old firefighter the situation was quite daunting and it’s easy to lose your head. However, I watched the calm, calculated way in which my Dad handled the incident which made a lasting impression on me and the way I approach situations now.”

However, Richie’s first experience of a fire was almost 13 years before that when he was just six and it’s a lesson he’s never forgotten! His Dad Terry ‘accidentally’ set fire to a row of 30ft conifers due to a bonfire. White Watch from Redditch soon arrived on the scene to the great embarrassment of his firefighter Dad.

Richie’s childhood memories don’t end there. He said: “As kids we were all very proud of Dad, and in the early days of his career we really wanted him to become an Officer as they wore white helmets. Officers always wore white helmets to distinguish them in the ranks, so one day my brother and I found one of Dads old cork yellow service helmets in the garage along with a pot of white paint, and we proceeded to re-paint his helmet. To say he wasn’t happy was an understatement! However, when he became a Watch Commander he got the white helmet we always wanted to see him in!

“Although in the early days of my career as a firefighter we lived and worked together he just treated me like one of the crew when we were at work. I certainly didn’t receive any preferential treatment. We could have had a huge disagreement at home but as soon as the pager went off we were firefighters and never carried over any previous issues between us into work.

“As a father myself now I wouldn’t hesitate in encouraging my daughter or son to think about a career in the fire service, however at age four and 20 months, I don’t think I need to worry about that just yet!”

For further recruitment information about becoming a firefighter with HWFRS and other opportunities visit www.hwfire.org.uk/join-us/wholetime-firefighter