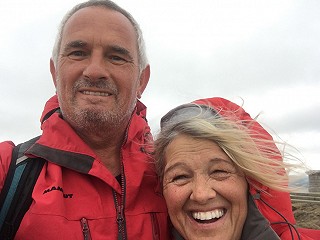 A South Wales couple whose walking holiday was brought to a painful end by an accident on the Malvern Hills has been singing the praises of Hereford & Worcester Fire and Rescue Service.

Experienced walkers Derrick and Liz Williams, from Caerwent, had been spending a few days in Malvern enjoying some scenic walking.

All had been going well with their plans until disaster struck on the second day.

“Last Thursday, we had walked up British Camp and did the hills on the south side,” said Derrick.

“Then, on Friday morning, the plan was that we would do the northern part.

“We set off up the Worcestershire Beacon and, although it was misty with a bit of breeze, we then thought that we would finish off the three northern hills.

“We had just set off from the Trig point and had only gone about 25 metres when Liz slipped on some flat, level ground and went over.

“She couldn’t speak for a moment and I feared that she had had a stroke.

“When she was able to speak again and told me what had happened, I picked her up and got her to shelter on the eastern side.”

The pair sat on a bench and Derrick raised Liz’s left foot, as she was unable to lift it by herself, before deciding to dial 999.

The White Watch crew from Malvern Fire Station was quickly in action.

“It was only about 20 minutes before the Fire Service were with us,” said Derrick.

“I was truly amazed by how quickly they got to us – they were able to get their 4x4 right up to us and take Liz down to the ambulance which had only been able to get about halfway up the Beacon.”

Now Liz has her left ankle in plaster and is attending the fracture clinic at the Royal Gwent Hospital, looking forward to the time when the pair can complete their walk on the Malverns without such a painful conclusion.