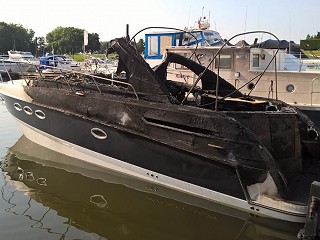 Hereford & Worcester Fire and Rescue Service (HWFRS) was called to a boat fire at Upton Marina at 12:19 today (Thursday 25 July 2019).

Crews from six fire engines and two rescue boats from HWFRS and a crew from Gloucestershire FRS worked hard to extinguish the fire which had spread to four boats, and to prevent the ignition of gas cylinders on the vessels. The HWFRS drone was deployed over the marina to provide vital information on the development of the fire.

Three members of the public sustained injuries and received care from paramedics at the scene before being taken to hospital by air ambulance.

Local residents were asked to close doors and windows while the fire was at its height, although this advice has now been lifted.

HWFRS is working with partner agencies to minimise any pollution in the water of the marina.

Fire officers will now investigate the cause of the fire.

At 16:00 fire crews were still in attendance at the incident, but activity was being scaled down.