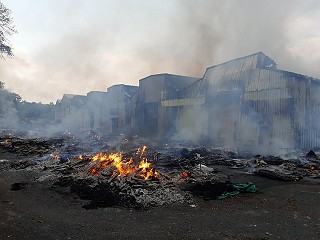 Crews from Hereford & Worcester Fire and Rescue Service were called at 16:27 on 26 April to a fire in the open at Hartlebury Trading Estate.

At its height there were 11 fire engines on site, including crews from Wyre Forest, Droitwich, Worcester, Bromsgrove, Malvern, Ross-on-Wye and Bromyard.

The incident was scaled back to one relief pump at midnight when crews damped down and turned over hot spots. A reinspection took place at 08:30 on 27 April and the incident was closed at 10:04 on the same day.

Police also attended and there were no casualties.

“Good, assertive early tactics helped in fighting the fire and the compartmentalization of the building assisted in preventing any spread,” said Group Commander Martin Lown of Hereford & Worcester Fire and Rescue Service. “Otherwise it could have been a lot worse.

“Computers were also retrieved from a two-storey office block to assist in maintaining business continuity.

“And we worked well with Severn Trent on site in redirecting our water supply to a different hydrant in order to minimize the impact on the community.”