Firefighter Terry steps down after 25 years 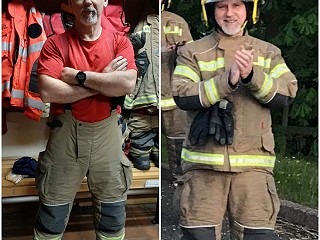 After more than 25 years of dedicated service Terry Phelps has decided to retire from firefighting duties with Hereford and Worcester Fire & Rescue Service (HWFRS).

Terry, aged 55, lives in Upton-upon-Seven in Worcestershire, the town where he most recently served as an on-call firefighter.

He shares a home with his wife Rachel and teenage sons Mitchell and Spencer, but despite his retirement as a firefighter he will continue working full-time as an Aircraft Parts Inspector at Dowty Propellers in Gloucester.

While working as an agricultural engineer for Midland Shire Farmers, which later changed its name to Countrywide, he formed a close friendship with a colleague who was also an on-call Sub Officer at Upton-upon-Seven fire station.

Regularly hearing stories about the incidents his colleague was called out to, together with tales of the camaraderie between the firefighters at the station, ignited Terry’s interest in joining the fire service.

It wasn’t easy convincing Terry’s manager at the time to allow him time off to become an on-call firefighter until there was an actual fire at Defford Mill, near Pershore, a distribution centre used at the time by his employer.

It was then that his manager saw first-hand the life-saving work of the fire service and agreed to give him the time off when needed.

Although very fit at the time when he enrolled with HWFRS, from regularly playing football and rugby, Terry had to embark on a gruelling fitness and training course, followed by on-call assessments, before he qualified.

From attending serious road traffic collisions (RTCs) and witnessing horrendous fatalities, to rescuing beloved family pets who have found themselves trapped in the most unusual places, the work of a firefighter isn’t just about putting out blazes.

There was only one time when Terry considered giving up, when his son Mitchell was born 18 years ago, however he was soon convinced to stay by his colleagues at the fire station.

He split his career between Upton and Pershore fire stations and during that time met ‘friends for life’.

He said: “When you join the fire service you don’t just join an organisation; you join a family who you know have always got your back. I will miss being a firefighter but I think most of all I’ll miss the camaraderie and banter between my friends at the station.”

Disappointed that he was unable to give Terry a big send-off, due to the current lockdown restrictions, Watch Commander Craig Kitchener at Upton Fire Station said: “Terry has had an impeccable record as a firefighter for more than 25 years, and we’ll be sorry to see him retire. I wanted to give him a big send-off and the recognition he deserves, however, we’ll have to put that on-hold – just for the moment!

“Thank you Terry, you’ll be missed by us all.”