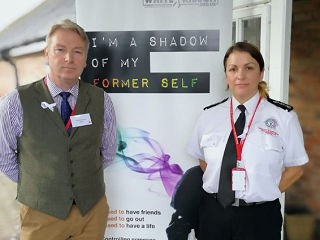 An event designed to shine a spotlight on coercive and controlling behaviour took place yesterday (28 November).

The event, which marks the White Ribbon Day campaign, included two guest speakers who have been personally affected by domestic abuse.

Nick Gazzard, whose daughter was murdered by her ex-boyfriend, and Luke Hart, whose mother and sister were murdered by his father, bravely shared their stories to highlight the dangers of controlling behaviour and the devastating effects it can have. Nick Gazzard also spoke about Hollie Guard, which is a free phone app that turns your smartphone into a personal safety device. If you are in danger then you simply shake your phone or tap the screen to generate an alert. Your location and audio/video evidence will then automatically be sent to your emergency contacts who can take action to help you quickly. Staff are encouraged to download the app and tell friends and family about it.

Chief Fire Officer Nathan Travis said: “HWFRS is fully committed to doing all it can to help put an end to domestic violence. By raising awareness through this joint event, we hope that more people will recognise the signs of an abusive relationship so that those who suffer domestic violence or those who witness it can speak out and seek the appropriate help.”

The White Ribbon campaign asks people to make the promise to never commit, excuse or remain silent about violence against women. It also asks people to take responsibility in working towards a future without violence.