Home » About us » The Fire Service » Fire stations » Upton upon Severn 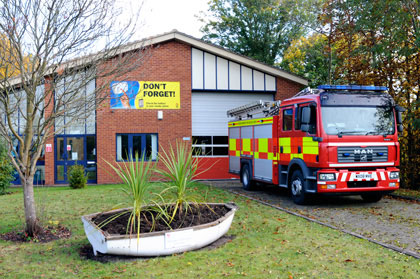 Upton-upon-Severn Fire Station is located at the top end of the high street and serves a population of just over 3000 people, which significantly increases over during the festival season in the late summer.

Upton-upon-Severn Fire Station is a retained station, so it is staffed solely by on-call firefighters, who respond to emergency calls whenever they are needed.

The station has a MAN fire engine with a compressed air foam system, which is a first-line attack engine that can carry a crew of up to six firefighters along with firefighting and rescue equipment. Furthermore, the crews also receive specialist training in water rescue to assist the community during flooding events, especially since Upton has the only bridge over the River Severn between Worcester and Tewkesbury.