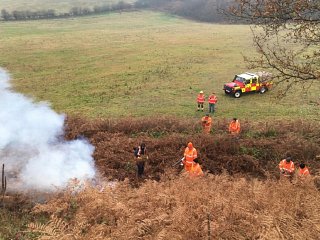 Hereford & Worcester Fire and Rescue Service (HWFRS) and Severn Valley Railway are hoping to be seeing a lot less of each other in emergency situations next summer.

In recent years, there have been a significant number of emergency calls to the popular attraction to deal with lineside fires.

These are often caused by ash from steam locomotives igniting undergrowth and grass – and the problem was particularly bad during the long hot summer of 2018.

During an especially hot spell last July, the railway took the decision to temporarily run only its heritage diesel locomotives to reduce the risk of fire after five separate call-outs on a single weekend. However, this was disappointing to many visitors who wanted the full steam railway experience.

But now, after staff attended a 'controlled burn' course with railway volunteers, hopes are high that the number of lineside fires will be substantially reduced.

"The actions that we can now take will reduce the risk to the countryside and surrounding communities, and the impact on the Fire Service, when the steam trains are operating in the summer.

"It will also allow Severn Valley Railway to manage the undergrowth and permit wild flowers to return to areas covered by fern and bracken."

Watch Commander Slipanczewski said that the method of identifying areas most at risk of lineside fires uses exactly the same criteria used for predicting where wildfires would be most expected.

"Using this method, the group identified the four most at-risk areas and the time of day where fires would be most likely," he said.

"So now the group of volunteers knows the high risk areas on which to concentrate, when the programme of controlled burning begins between February and April.

During that period, Hereford & Worcester Fire and Rescue Service will support the volunteers with an off-road firefighting capability.

It's another example of HWFRS working with local businesses to reduce the risk of fire and prevent damage to businesses, property, and environment.