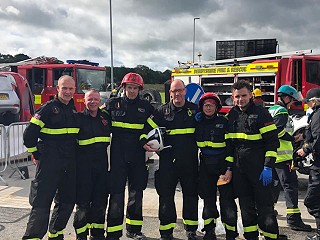 The Hereford & Worcester Fire and Rescue Service team has returned with a clutch of prizes from the UKRO National Challenge in Derbyshire where 28 teams from fire services all across the UK competed.

The crowning achievement is the overall runners-up spot secured by Ross-on-Wye in the Extrication section which means that they qualify to represent the UK at the World Rescue Challenge in 2020.

“It’s been a fantastic event and the team feels privileged to have had the opportunity to engage with rescue professionals from across the country, gaining and sharing knowledge and skills to advance professional rescue,” said Watch Commander Craig Newman who managed the team.

“These skills are directly transferrable in making the roads and waterways of Herefordshire and Worcestershire safer.”

“Thank you to HWFRS for their support and backing and to the UKRO assessors and education team members who have helped to advance our knowledge and skills, always pushing us forward.

“Finally thanks to Holmatro UK for once again supporting the team as we move forward.”