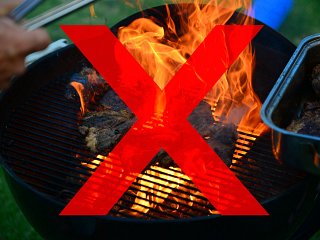 "The wildfire incident on the Malvern Hills which started on Monday afternoon was closed this morning at 05:38 when the last fire crew left.

"Since 15:22 on Monday, more than 100 firefighters and 13 vehicles from seven stations throughout Hereford and Worcester were deployed to an area around Earnslaw Quarry and the West of England car park to extinguish a fire which was most likely caused by a discarded disposable barbeque.

"Crews made fire breaks to reduce the spread of the fire in turbulent conditions and used 10 backpacks, 10 beaters, six hose reel jets, and two air blowers. A Police drone was deployed and compressed air foam system jets were also in use, and the water carrier was used to shuttle water up the hill. The fire was dampened down using backpacks and beaters. Crews were on site all Monday night and firefighting operations started again at 05:00 with dampening down using a fogging unit and extinguishers.

"Crews remained in place throughout Wednesday and the incident was closed at 05:38 on Thursday when the fire service closed the incident. No injuries to the firefighters or the public were sustained.

"We continue to issue warnings about wildfires, asking people to be extra vigilant and take steps to reduce the risk of wildfires and also to remind the public that BBQs are not permitted on the Malvern Hills at any time as they are a threat to the grasslands, wildlife, and the general public during dry weather."