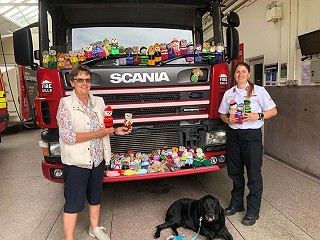 A generous Pershore resident has been putting her knitting needles to excellent use to support the fire service and the families they’re deployed to, at often traumatic times.

Accompanied by Rudy, her rescue Labrador, Sheila Allies (73), spends her evenings knitting ‘trauma teddies’ for Hereford and Worcester Fire and Rescue service as part of their ‘call out’ equipment.

The teddies travel on HWFRS’s front line appliances to fires and rescues, for crews to hand out to youngsters needing comforting at frightening incidents.

The project was inspired by a brainwave from Watch Commander Jayne Collins, from Redditch fire station, who has launched the scheme.

Jayne came up with the idea after talking to colleagues in other fire services and appealed on Facebook for knitting volunteers. Sheila got in touch because she’d already made some and was wondering who could benefit in her area.

Sheila had been sending them abroad but thought they might also be put to good use closer to home.

In no time at all, Sheila brought a boxful to Redditch fire station, and Jayne invited her for a look round and to show her how they would be used.

“The very first day I got the green light to start using them, there was a nasty road traffic collision right in front of the station – although we hadn't even started duty we heard the crash and rushed out to help.

“A six year old little boy whose mum was injured was struggling to be brave but was very shaken, so he was thrilled to be given a teddy. He thought it gave him superpowers to be brave for his mum and it worked a treat!

“The teddies, as well as some hedgehogs, are Sheila's handiwork and her friends have also knitted mice which go down well. They can be used to break down barriers. I now have about 90 in total and plan to distribute them across the service area, in plastic bags to keep them clean.

“We’re so grateful to Sheila and her friend for their hard work, which is already making a big difference to children at a stressful time.”

“Although I do most of the knitting, it is lovely that my friends are supporting me, aged 80 and 92, and now we have mice and hedgehog puppets as well as teddies. I am so glad they are being put to good use.”