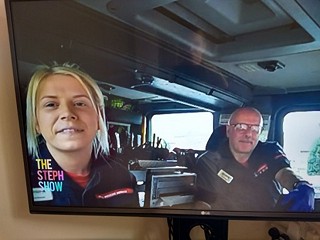 You've been on The Steph Show on Channel 4 twice over the last couple of weeks. You came across as so relaxed…

“I really enjoyed it – though I was a bit embarrassed because I didn’t know that Ashley Banjo was going to judge my dancing! I knew he was on the show but I didn’t know I’d be speaking to him.”

What kind of reaction have you had locally?

“Oh my goodness, I’ve had such an amazing reaction! I haven’t seen many people (because of social distancing) but I’ve had lots of messages. My Nan contacted me telling me I came across better than my Dad! My manager from the residential children’s home I work at contacted me and the Mid-Wales Journal got in touch and put us on the front page the following week.”

You've had a reaction from young girls locally - what have you been asked?

“In the children’s home I work at, I look after girls aged between 13-16 and I’ve had a fabulous reaction from them. One now wants to be a firefighter – she told me I made it look so cool! It’s one of the best decisions I ever made so if I’ve inspired someone else to do it, I’m really happy about that.

I’ve had girls ask me if you have to be strong, but I tell them that you just need to be strong enough to lift a ladder. You don’t need to be super-strong and you can work at it. When I applied, I knew I had to work on my grip strength to extend a ladder. I trained really hard for three weeks – in the gym every day – and when I went back for the assessment, I passed it. It wasn’t the smoothest ladder extension I’d ever done, but I did it and passed! Since then, it’s not an issue for me because I’m doing it all the time.

In the past, I’ve also been asked what happens when you go to a fire – do you get burnt? And a 19-year old girl asked me all about the selection process and whether they prefer to take on men than women. I obviously told her that wasn’t the case at all.”

Don’t you think it’s a shame that some girls think like that in this day and age?

“Yes, I do. I know it’s male-dominated, but as my Dad’s in the Service, I knew that they were encouraging more women to join.”

At the moment, only 7.6% of firefighters in our Service are women. We know most women won't apply unless they think they can do 100% of the job and so in the lead up to our wholetime process, we've been trying to encourage more women to be confident and believe they can do it. What would you say to them?

“That figure’s really surprised me – I didn’t know that. I’d say we have just as much skill as men, to do this job. Taster days or awareness sessions are amazing – find out where you struggle so that you can work on it – like I did. If you struggle with something, don’t let it set you back – it can be a blow, but don’t let it defeat you.

“Kington Station were great when I applied – they really helped me. When I was training hard to pass the physical tests, the crew supported me and had me practising all the time. They really wanted me to do well. So, I’d say to anyone interested in being on-call, go to your local station – they’ll help you.”

What would you say to anyone who's worried that being an on-call firefighter would be too much of a juggling act?

Lauren laughs. “I’ve had an email from the Station Commander telling me I’m doing too many hours! But I’d hate to be off call and miss a job. I’d say that it’s a balance and you can plan around it. Most young people are worried about missing out on their social life, but you always know in advance when you’re going to be on-call. The 19-year old girl I told you about said she likes going out on a Friday night for a drink and asked what would happen about that. I told her she still could – just book back on, on Saturday afternoon, or go out on Saturday night. It depends on how many people are available to keep the pump on the run. You just need to plan.”

Note: Although on-call firefighter recruitment is currently on hold, anyone interested can still access the expression of interest form through our website and they’ll be contacted when recruitment is progressed again. As regards wholetime recruitment, a revised timeline for this process will be reviewed in June.