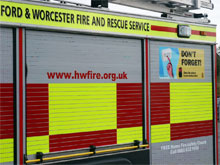 At 20:41hrs on Thursday, August 05, 2010 firefighters from Malvern were called to reports of a tree fire in Gloucester Close Malvern. Arriving at the scene the crew found two, 40-foot conifers and a large amount of garden rubbish well alight.

Firefighters used hose reels and drag hooks to bring the fire under control.

Investigations indicate the fire to be suspicious in nature and West Mercia Police would like to hear from anyone who saw suspicious activity in the area that evening. If anyone has information about this fire that may be useful to the Police they can call Malvern Police Station on T: 0300 333 3000 quoting reference 218S/060810 or contact Crimestoppers anonymously on 0800 555 111.