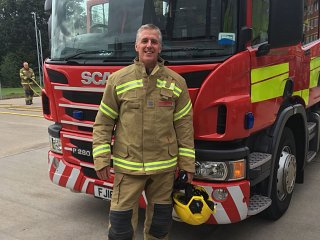 During 30 years as a firefighter with Hereford & Worcester Fire and Rescue Service, Rob Barr has experienced a huge variety of different roles.

Now, as the 50-year-old, who spent 18 years working at Worcester Fire Station before moving across to his current position in Bromsgrove, prepares to retire from the Service later this month, he has been reflecting on how his job has evolved since he joined up in 1989.

And it's not just the job which has changed but personal protective equipment, too, which has progressed from the days of yellow plastic leggings to something rather more state-of-the-art.

"During three decades, I have attended all sorts of calls – from fires and traffic collisions to the summer floods back in 2007 and animal rescues," he said.

"I was even part of the crew called when an aircraft came down in Bewdley.

"But recently the role has also become very active in community safety, and I have enjoyed talking to groups from children to senior citizens in pursuit of fire safety, as the emphasis has now often focused on fire prevention with the reduction in call-outs these days."

"I have had some job offers but I'm going to be taking some time off for a while," he said.

"I shall be doing the school run and we're going to be moving house.

"And I'm looking to be putting a few miles on the motorcycle.

"I have had an amazing career and it has been a privilege to serve," he added. "But after the devastation I have seen over the years, I would urge everyone to ensure that they have at least one working smoke alarm – it could save your life."