Tracy drives her career forward by passing her LGV certificate 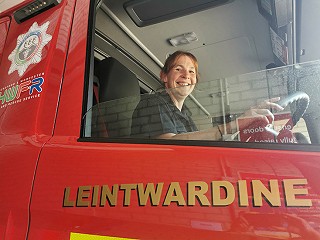 A woman firefighter and mum of three from Herefordshire is driving forward her flourishing career by qualifying as an LGV (Large Goods Vehicle) driver.

Tracy Edwards serves as an on-call firefighter with her local Leintwardine fire station, having joined Hereford & Worcester Fire and Rescue Service in 2014.

Tracy (40) first applied to join the fire service as a retained firefighter in 2013 but took a whole year to build up her strength and stamina for the fitness tests, failing the ‘ladder lift’ at her first attempt.

Not to be put off, she continued to gain strength and passed the tests second time around, going on to complete her three weeks of Core Skills Training in 2014.

From then on, Tracy rapidly acquired experience, handling a range of incidents, including fires, floods, rescues and road traffic collisions, while holding down her part time job as a swimming instructor with Teme Leisure.

She teaches a range of ages from four months to adult through the Centre’s Learn to Swim programme, private swimming coaching and school swimming lessons.

With two daughters aged 23 and 20 and an 11-year-old son, life carries on being ultra busy for Tracy as she successfully juggles the three roles, providing 120 hrs cover tackling daytime, evening, overnight and weekend call-outs, as well as drilling one night a week.

Tracy said: “Memorable call-outs during my six years as a qualified firefighter have included a car floating in floodwater, barn fires, a cow stuck in a very boggy pond , and not forgetting the cat that wouldn’t come down from a roof!”

For a while LGV training seemed a long way off!

However Tracy, who attended Leintwardine Primary School and Wigmore High School, has always relished a challenge and after getting used to the unpredictable world of firefighting, set her sights on qualifying as an LGV driver, only recently notching up her latest success.

But the huge size and 18 tonne weight of a fire appliance meant a quantum leap for Tracy who said her biggest vehicle until then had been a 4x4:

“The sheer size and weight of a fire engine is very different from my little Peugeot. Added to that, Leintwardine’s operating area is a very rural part of Herefordshire and Shropshire with narrow country roads, totally different from the big cities.

“So the thought of having to undergo much of my driver training in the built-up areas surrounding Birmingham was extremely daunting!

“But once accepted on to the course, I persevered and soon got used to the much bigger vehicle, acquiring the necessary proficiency on roads of every size, in both urban and rural areas, as well as driving at night and in the rain. I also had to pass the theory test.”

Initial training for LGV trainees takes place at the Service’s Training & Development Centre at Droitwich before they get beyond the gates for LGV driver training on public roads with a qualified LGV instructor.

The LGV Initial course lasts five days with the driver then returning to their station to complete 12 hours of normal driving practice, also taking in night-time driving.

There is additional online training via the Roadcraft programme, with constant assessments, before gaining the certificate and completing the five-day ERDT (Emergency Response Driver Training) practical course.

After qualifying, it is a case of building up experience driving to call-outs throughout the operational area, both day and night and in all kinds of weather. Once on scene, Tracy then plays her full part with the rest of the team in tackling the incident, whatever it might be.

Tracy said: “My career highlight continues to be completing the annual three weeks mandatory core skills training which started me on my journey as a firefighter, something I never thought I’d achieve!

“I would love to see more women join the service, either full or part time. It’s a very rewarding career and there are plenty of opportunities, as I’ve shown.

“I’m a member of the fire service’s Women@HWFire working group, which champions the role of woman firefighters. Our slogan is #ajobtobeproudof and we really want to encourage more women to join up in an operational role.”

The fire engine parked up, Tracy still doesn’t relax, as she explained: “Any spare time I have is spent walking with my three cocker spaniels, running and road cycling, as well as looking after my children.

“Having achieved a long-time goal of running the Great North Run half-marathon last year, I’m now looking at achieving some cycling tours starting with the Coast and Castles route from Edinburgh to Newcastle.”

Ade Taylor, Tracy’s driving instructor at the Training & Development Centre, congratulated her: “Before becoming a Service driving instructor, I was training centre watch commander when Tracy completed her initial training, which took in the challenges of core skills and breathing apparatus training.

“It’s been marvellous to to see her develop and advance throughout her time with us. I would encourage both men and women to consider the fire service as a career, with its wide range of opportunities available to both sexes.”

Despite coronavirus, the Hereford & Worcester Fire and Rescue Service is still recruiting for various roles: check out vacancies on https://www.hwfire.org.uk/join-us/latest-vacancies/#oncallff to see what is available.