Phil looks back on his 39 years of service 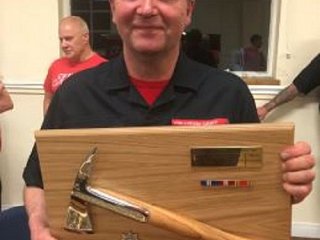 After retiring as an on-call firefighter just one month shy of completing 40 years' service, Phil Hicks has a wealth of memories to look back on.

"When I first started, we still had the old petrol-engined Bedford and Dennis fire engines," he recalled.

"And the uniform was much different back then – we still wore yellow plastic leggings and had short tunics."

Phil, who is still a mechanic at Hereford & Worcester Fire and Rescue Service's Operational Logistics department in Malvern, saw it as a natural progression to sign up as an on-call firefighter alongside his main job with the Service.

"Back then, it was just what you did and it was a logical step," he said. "These days it's perhaps a little different, although very many people still take on an on-call role alongside their day job.

"I have been on so many shouts that's it's quite difficult to pick individual ones out but, of course, the one that really stands out in my memory is the tragic Sun Valley fire in Hereford back in 1993.

"And there were a couple of big fires out at the army supply depot at Moreton-on-Lugg, too.

"I worked with so many characters down the years – I still quote some of the old sub-officers that I worked with in my early days but I out-lasted all of them."

After almost four decades of service, Phil is quite content with his decision to step aside.

"I have really enjoyed it but there comes a time when you think that enough is enough," he said. "Being an on-call firefighter is a huge commitment and you perhaps don't realise how big until you step back.

"It will be a big change for me but I'm looking forward to spending some more time with my wife Jane and our grandchildren.

"My role as a mechanic will still keep me involved, though, and I've no doubt that I'll be calling in to the station to keep in touch with the lads."