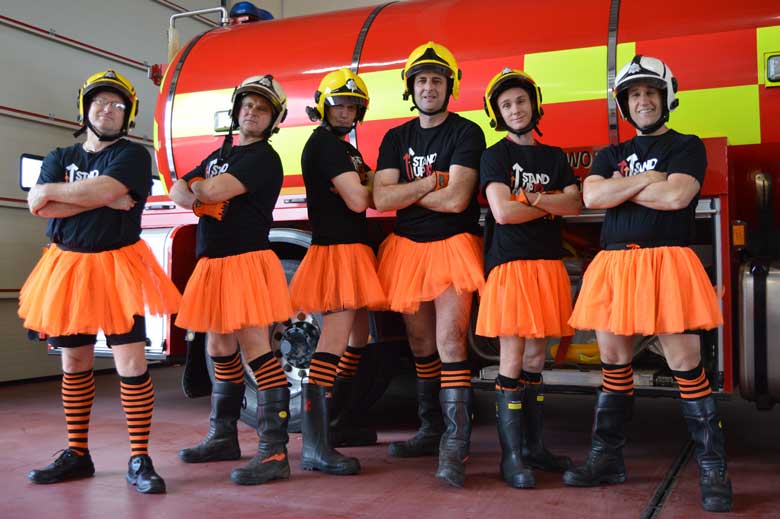 Firefighters from Green Watch at Evesham Fire Station agreed to turn orange for a day with a burning desire to raise money for game-changing research into cancer.

They swapped their heavy-duty trousers in exchange for orange tutus and wasp-striped socks to display some impressive ballet moves to their own fun-filled version of the well-known Nutcracker classic - 'Dance of the Sugar Plum Firefighters'.

Firefighters from the Hereford & Worcester Fire and Rescue Service (HWFRS) are trail-blazers in the Herefordshire & Worcestershire for Stand Up To Cancer, a joint national fundraising campaign from Cancer Research UK and Channel 4.

And they are encouraging others to 'Get Orange-ified' by getting sponsored to stand out in the colour orange at work, school, or with friends.

HWFRS firefighters hope to inspire members of the public to raise cash to get new pioneering tests and treatments to cancer patients faster.

Evesham Station Commander, Steve Fox, who turned orange with his Green Watch firefighters said: "We were delighted to don tutus for the day in support of Stand Up To Cancer!

"It was a fun and easy way to get involved and help raise money to save more lives."

Chief Fire Officer Nathan Travis added: "Stand Up To Cancer is very close to our hearts as many of us have friends and family who have been affected by the disease. We're determined to do all that we can as a Service to help raise money and help fund life-saving cancer research."

Every day, 85 people are diagnosed with cancer in the West Midlands. By joining Stand Up To Cancer, supporters in Herefordshire and Worcestershire will be uniting with doctors, nurses, scientists and celebrities to generate funds, raise awareness and help accelerate progress.

Jane Redman, Cancer Research UK's spokesperson for the West Midlands, said: "The firefighters from HWFRS stood up to the challenge to become trail-blazers.

"I hope men, women and children from across the region will Wear Orange, Pay Up and Take Cancer Out.

"By supporting Stand Up To Cancer, they'll be helping to raise money and transform the lives of cancer patients and their families. All supporters need to do is simply pull on a bright orange item of clothing and get sponsored or make a donation for wearing it."

Stand Up To Cancer aims to accelerate the translation of brilliant scientific discoveries into innovative cancer medicine, tests and treatments. Every donation helps to support this progress and bring forward the day when all cancers are cured.

This year, there are many ways to Stand Up To Cancer and show support. Cancer Research UK is urging people to get started right now and sign up for their free fundraising pack which includes everything supporters need to spark creative ideas and help beat cancer sooner.

Jane added: "One in 2 people in the UK will develop cancer at some point in their lives. Every day, doctors, nurses and scientists work tirelessly to beat cancer.

"Stand Up To Cancer raises money to speed up breakthroughs from the lab to patients. With support from the people of Herefordshire and Worcestershire we can continue to fund vital research to get new and better treatments to cancer patients faster."

Since it was launched in the UK in 2012, Stand Up To Cancer has raised more than £38 million to fund over 40 clinical trials and research projects.

Stand Up To Cancer is supported by a host of celebrities from TV, film and radio including Davina McCall, Alan Carr, Bill Bailey, Edith Bowman and Kirstie Allsopp.

This autumn Channel 4 will once again bring the brightest stars from show business together in a dedicated season of Stand Up To Cancer programming.

For more information and to get involved visit standuptocancer.org.uk