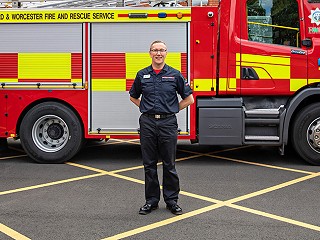 Nigel Crawford, who is one of four new on-call firefighters to join the crews at fire stations around Worcestershire, has firefighting in his blood.

FF Crawford, who officially became part of Hereford & Worcester Fire and Rescue Service after his passing-out parade last week, is following in the footsteps of his father and his grandfather, who both served as firefighters in London.

Now, the graphic designer will combine his role at the HWFRS headquarters at Hindlip by becoming an on-call firefighter at Droitwich Fire Station.

Another of the new recruits, Richard Howie, also has plenty of firefighting tradition in his family, having grown up around the Fire Service College estate, where his father was a part of the service.

FF Howie brings lots of life experience to his new on-call role at Broadway Fire Station as he is also a musician gigging in the local area as well as a truck driver and a groundskeeper.

FF George Gibson, who works in the animal nutrition industry, is stepping up his community involvement to become an on-call firefighter at Malvern Fire Station after being a regular volunteer at his local animal shelter.

“He has been one of the hardest working firefighters the instructors have seen,” said Group Commander George Sherry, who is in charge of the training centre in Droitwich where, in total, seven recruits from Herefordshire and Worcestershire passed out in last week’s ceremony.

GC Sherry was also full of praise for FF Edward, who is joining the Upton-upon-Severn Fire Station.

“FF Edward is a very conscientious individual who has shown a great team ethos throughout his recruits’ course,” he said. “He is a very fast learner both theoretically and practically.”

FF Edward, who has run his own upholstery business for the last 15 years, is achieving a childhood ambition to become a firefighter.

That aim was further cemented by the work he saw the emergency services carrying out when he was involved in a very serious car crash which left him fighting for his life.