How a father sent his daughter into a burning building “on purpose”! 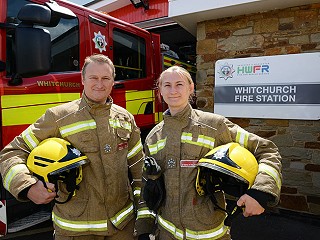 How would any father feel if he watched his eldest daughter don a Breathing Apparatus set and then asked her to walk into a burning building?

As a child Shannon was used to her father racing to the Fire Station each time his pager was called, watching from her front room window as the appliance left the station, blue lights flashing and sirens wailing. Who was to know that this was the start of a burning desire within her to one day join her father in doing the same?

When Shannon reached her teenage years she volunteered for the Fire Service, helping Mark with trauma training, often covered with realistic injuries in practice scenarios for fire crews. For Shannon it was being part of these training sessions that really made her want to be part of the team at Whitchurch, watching the crews working together and making a difference in her community.

“As soon as I reached 18 I put in my expression of interest to become an on-call firefighter and I was accepted,” said Shannon. “It wasn’t a straightforward process though as I only weigh 8 ½ stone and it took a while to build up the strength to pass the physical tests - which is often the case with smaller men and ladies.

“Undeterred, I trained hard and built up my strength and techniques to enable me to pass first time. I would say to anyone who is struggling not to give up. If you want something enough, it’s worth fighting for and I am so proud to have made it.”

Mark also started as an on-call firefighter in Whitchurch.

“I joined aged 18 in 1992 and achieved the role of Crew Commander a few years later,” he said. “In 2008, while maintaining my on-call role I also took a wholetime position within the Service and rose to the rank of Watch Commander working as an instructor in the Training Centre. Following this I ran Evesham Station before moving closer to home as a District Watch Commander, overseeing Whitchurch, Ewyas Harold and Ross-on-Wye stations.”

Shannon joined Whitchurch Station in February 2018 and, after passing her initial course, was thrown in at the deep end straight away responding to cliff rescues, road traffic collisions, water incidents, barn fires. She even stopped on her way back to work from the fire station to assist a mother and unresponsive baby, utilising the trauma skills she had learned on her course and all those training sessions with her dad.

It was just eight hours after completing her Breathing Apparatus course that Mark sent her into her first house fire in the early hours of the morning.

Mark recalled: “I remember looking over my shoulder watching her preparing her BA set and it reminded me of myself all those years ago - the adrenaline and nervousness all combined into one.”

Mark was confident in Shannon’s ability to deal with the fully developed house fire, as he had been one of the instructors teaching on her course.

“It was a privilege to pass on the skills and knowledge to the next generation of firefighters,” he said.

Shannon, who will be 20 later in June, combines her on-call firefighting role with a full time job as a general assistant at the Wye Valley Visitor Centre, Symonds Yat.

“I mostly work at the Butterfly Zoo giving tours to our visitors,” she said. “The centre’s owners are both ex-firefighters and they have been happy to let me stay on duty with the Fire Service and run to the station when my pager goes – it’s only a couple of hundred metres from the centre. As well as giving me tremendous moral support they have also been very helpful in letting the crews stage training events at the centre. It is essential to have the support of local employers to release staff to do an on-call role as, without it, the Fire Service could not provide the level of operational cover it currently does.”

Whitchurch are currently looking for new recruits to join the team and train to be firefighters.