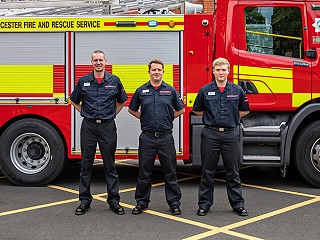 The trio were officially welcomed to Hereford & Worcester Fire and Rescue Service at their pass-out parade at Droitwich Fire Station last week.

Duncan Gilby joins the ranks at Whitchurch, Reece Berry will be serving in Bromyard and Richard Manning is the newest recruit at Peterchurch,

All three bring a variety of life skills to the service.

FF Gilby moved to Whitchurch 18 months ago and has had his own business as a furniture maker since 1989.

He has helped to build a new school in Zambia and has also developed other skills in scuba diving and drone flying.

He is now looking forward to giving something back to his community, as is FF Manning who works in Peterchurch as a butcher.

He was inspired to become a firefighter after seeing a car crash involving three vehicles outside his place of work.

He was unable at that stage to do a lot to assist and thought: “How much more help would I be if I was a firefighter.”

FF Berry, who is an engineer, is delighted to be making a difference doing a job that is really interesting and different in the town which has been his home all of his life.

“He was always the first recruit to arrive at the start of the day and the last to leave,” said Group Commander George Sherry, who is in charge of the training centre where, in total, seven recruits from Herefordshire and Worcestershire passed out last week.