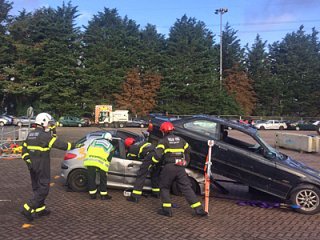 From 8-11 September 2016, five talented teams from Hereford & Worcester Fire and Rescue Service (HWFRS) were among Fire Services from across the entire country competing in the United Kingdom Rescue Organisation (UKRO) National Challenge 2016.

The victorious HWFRS Trauma Team consisted of Jayne Collins (Kidderminster) and Simon Griffiths (Hereford), who gave an outstanding performance to win the Trauma Challenge. HWFRS also had a second Trauma Team who placed in the top 10, out of 24 teams. Both teams were assessed on scene safety, initial patient contact, assessment of injuries and condition, treatment of casualty and patient handover.

The competition spanned over three days and, during this time, the teams competed against other fire services in a range of challenging scenarios that put their talents to the test.

Other successes from HWFRS teams occurred throughout the 3 day challenge. The HWFRS Extrication Team from Ross-on-Wye finished in an incredible second place nationally. On day 1 of the extrication challenge the crews were given 20 minutes to safely rescue a casualty from a road traffic collision scenario. The top 20 teams passed through to the second day for a more complicated two car, two casualty scenario where the team was judged on command, technical and medical ability. 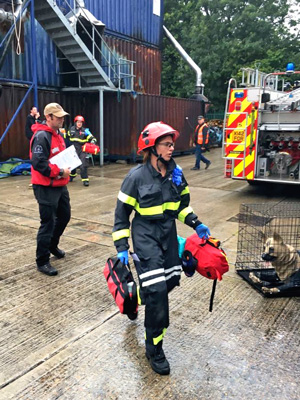 The inaugural UKRO Animal Rescue Challenge was a huge success, and a combined HWFRS team from Bromyard and Pershore took an impressive second place. The animal rescue team were confronted with a large animal rescue simulation in which a large articulated horse on its back needed to be rescued out of a horse box.

The HWRFS water rescue team from Evesham were tasked with a scenario that tested boat handling techniques and casualty rescue ability on their first event together, and although they didn't place in the top 3 they had the opportunity to see and learn new techniques over the 3 day challenge.

Chief Fire Officer Nathan Travis said: "Competitions of this kind are an integral part of our training process as they allow our firefighters to learn new techniques, hone their existing skills and share best practice with fire services from across the UK.

"Over the last few days, the teams have been faced with an array of challenging exercises that have demonstrated their extremely high level of talent and skill. All of the scenarios that have they have tackled have been carefully designed to further educate them and enhance their skills so that they can ultimately respond to real life incidents in the best way possible."

He concluded: "A significant amount of preparation has taken place prior to the competition, where the teams have worked hard to improve and build upon their skills. I'd like to thank them for their hard work and congratulate all of the teams that have competed this year."

More details on the capabilities of the Service, as well as details on how to be become an on-call Firefighter, can be found in The Fire Service section of the website.