Fire at recycling plant under control 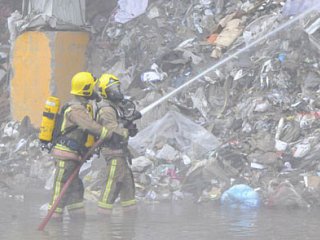 The fire was reported at 10.50am this morning (Wednesday 12 December) and at the height of the incident, there were 15 fire appliances in attendance (including two from West Midlands Fire Service) as well as HWFRS’s Hazmat (Hazardous Materials) Officer and a Command Support Unit from neighbouring Shropshire Fire and Rescue Service.

The fire involved paper and plastic materials being stored ready for recycling in a large warehouse at the site. Fire crews sectorised the building as they tackled the blaze, using firefighters in breathing apparatus, and three main jets in one sector and two main jets and a ground monitor in the second sector. The fire is now under control although crews remain at the scene, continuing to damp down and turn over the waste material.

Area Commander Jon Pryce from HWFRS said: “We arrived at the plant to find a deep-seated fire in a huge pile of waste materials awaiting recycling. The fire is now under control but we expect crews to remain at the site for some while yet.”

He confirmed that there were no injuries as a result of the incident and that the building being used to store the thousands of tons of waste material was unaffected by the fire.

He explained that the incident had generated a large quantity of smoke which, due to the foggy weather conditions, had not dispersed. This led to several nearby business premises being evacuated as a precautionary measure, and advice being issued to those living or working nearby to keep their doors and windows closed. Those evacuated will not be able to return to their properties until the heavy smoke clears, and road closures are also expected to remain in place for some time.

HWFRS confirmed that the recycling plant has an excellent safety record and that staff at the site assisted with the incident by using their machinery to help move waste material. The Service also thanked other agencies involved, including West Mercia Police who managed the road closures and evacuations, and West Midlands Ambulance Service who were on standby for firefighter safety. The Environment Agency also attended the incident.