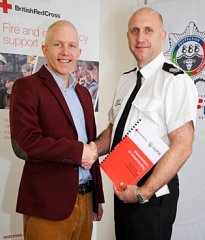 Andrew Strong, Operations Director for the Red Cross in Herefordshire, Shropshire and Worcestershire, joined Deputy Chief Fire Officer Richard Lawrence at HWFRS’s Headquarters in Charles Hastings Way, Worcester, to sign the formal Memorandum of Understanding (MOU), setting out the roles and responsibilities of the fire service and the charity in delivering the Fire and Emergency Support Service (FESS). This includes the range and scope of assistance, as well as legal and financial considerations.

DCFO Richard Lawrence from HWFRS explained: “The British Red Cross has been supporting HWFRS since 2006, with a team of volunteers attending some of our more serious fires or other emergencies to offer practical or emotional support to those affected by the incident as well as welfare to our front line fire service personnel.”

He explained that the Red Cross has provided a team of volunteers using a specially adapted vehicle while HWFRS has provided its fuel and a mobile phone for use by the volunteers while on Fire Service Duty, and that these arrangements have now been formalised as part of the MOU agreement.

Red Cross volunteers provide emotional support, immediate temporary shelter and practical items like clothes, food and toiletries to those affected. They can also find temporary accommodation and signpost people to other organisations that can help.

He added: “Originally there was just one FESS vehicle covering our Service area, mostly serving Worcestershire, but the Red Cross now has a second vehicle which covers the whole of Herefordshire. This is a fantastic resource and makes a vital difference to the well-being of victims who can be left feeling shell-shocked and vulnerable following a major incident.”

Andrew Strong from the Red Cross explained that the new vehicle was put to use the very day it was brought into service, when volunteers from the charity assisted a group of 20 people evacuated from their homes in Edwyn Ralph near Bromyard following a gas cylinder fire (8 December). He said: “This incident happened in the early hours of a Saturday morning but our volunteers were quick to respond, and were soon offering blankets and socks to those who had rushed out of their homes. We were also able to offer refreshments from the FESS vehicle and help transport residents back from the rest centre to their homes once the emergency was over.”

He said this incident was typical of the kind of support the Red Cross could offer and he was delighted that the MOU was in place to formalise the excellent working arrangements between the charity and the fire service.

DCFO Lawrence ended: “Both of our organisations are committed to helping prevent emergency situations arising but when a fire or other disaster does occur, the complementary services we provide can ensure those affected get the best possible support. We have every confidence in the Red Cross and their volunteers, and look forward to a successful partnership for many more years to come.”