On Friday 11 September, firefighters, members of the public and Fire Service support staff from across the county received awards at the annual Worcestershire Medals and Awards Ceremony. The event, which was held at Worcester Guildhall, honoured staff for their outstanding service and commitment to the Fire Service. 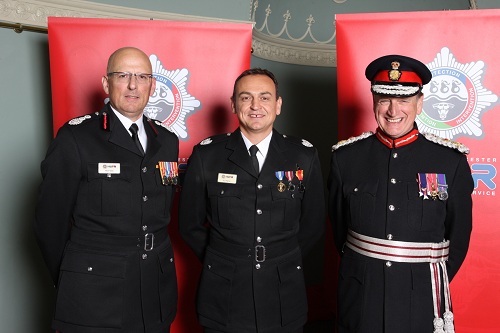 As well as awards for long service, there was also The Silver Axe Award which is annually given to the Service's top trainee firefighter who has demonstrated exemplary attributes and scored highly in all areas of training. This award went to Firefighter Michael Corsi who is based at Pebworth Fire Station.

On the subject of young talent, The High Sheriff's Award is presented annually to the top Young Fire Fighter that has demonstrated the most determination and enthusiasm. This year's award was presented to Jordan Laugher who is a member of the Droitwich branch of the Young Fire Fighters Association.

Chief Fire Officer, Mark Yates, then went on to present the Chief Fire Officer's Certificates of Commendation which were awarded to firefighters Michael Dillion, Jack Chamberlain, Tim Jenkins and Watch Commander Yvonne Eaton who had each gone beyond the normal call of duty and made an exceptional contribution to the Service and the communities they serve..

He then presented the Chief Fire Officer's Letter of Congratulations which is given to staff or members of the public who have engaged in acts of courage or bravery, performed to a high standard under difficult circumstances or made a significant contribution in the delivery of a Fire Service project. Letters were awarded to Firefighter Michael Long, , Nicola Dillon, Susan Heeley and Heather Burley.

The evening concluded with the Chairman's Certificate of Commendation which aims to recognise individuals that have made a substantial contribution to the work and aims of the Fire Authority, made a significant contribution to community safety or helped deliver a piece of work with outstanding innovation. These hard-earned awards went to Alan Jones, Sarah Sanderson and Alex Fuller, Firefighter Wayne Berry, Charlotte Graham and Tania Ling, Jean Cole, David Morris, David Pritchard, Bethan Groom, Nigel Crawford and Station Commander Phillip Griffiths.

Chief Fire Officer Mark Yates said: "I was thrilled and extremely proud to once again play a part in the annual Worcestershire Medal and Awards Ceremony which celebrates the outstanding talents and commitment of our staff.

Each reward was truly well-deserved and I would like to publicly thank each recipient for their on-going passion, dedication and professionalism. "

A separate awards ceremony for the Herefordshire area will follow on 20 November at Hereford Town Hall.