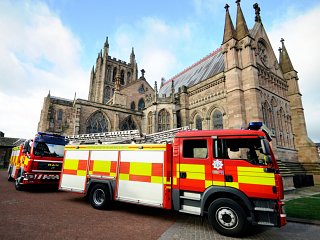 After witnessing the devastating scenes in Paris yesterday, Hereford & Worcester Fire and Rescue Service expressed its immense respect for the Paris Fire Service and its firefighter colleagues as they battled to control the catastrophic fire at Notre Dame Cathedral.

Chief Fire Officer Nathan Travis said: "Our thoughts are with the people of Paris and the French nation, as a whole, as they come to terms today with the extensive damage that has been done to one of the world's most iconic buildings. But in the face of such adversity, it was also humbling to watch the heroic efforts of our Parisian colleagues as they fought to bring the inferno under control.

"Thankfully, we also understand that the casualty numbers have been low despite the scale of the fire, with only one firefighter being injured. We wish them a speedy recovery.

"Although the cause of the fire is not yet known, it is thought it may be linked to the renovation work that was being undertaken on the roof.

"Because of where the fire started on the roof, the restricted access to it and the speed at which it developed, the fire crews would have been faced with a challenging incident right from the beginning."

In respect to our own two cathedrals in Hereford and Worcester and other iconic historic buildings across our counties, HWFRS have well developed operational response and salvage plans in place that we exercise in partnership with the in-house teams responsible for those buildings and their overall fire safety.

Local fire crews visit these buildings regularly to ensure that in the event of a fire they are familiar with the access routes, layout and available water supplies, and treat these buildings as 'high priority' in our risk based intelligence programme. Local fire crews will also regularly exercise and train in and around our cathedrals, as these buildings are not only large in size and challenging to deal with in the event of a fire, but in areas the public do not often access they also have inside them very complex layouts with limited ways of getting in and out.

We also offer regular safety advice in respect to fire alarm systems, extinguishing equipment and escape routes – in respect to both day-to-day activities and if special events are being held and the fire preventions measures within these buildings is regularly reviewed and upgraded, however it is sadly the case that many fires in historic buildings tend to occur during renovations or restorations.

The Service fully understands the value of such buildings, both historically and to the businesses they support as well as to the tourism industry in the two counties.