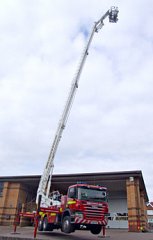 On Tuesday 17, August 2010 at 12:41pm Hereford & Worcester Fire and Rescue Service was called to rescue an injured construction worker from the building site for Worcester's new library.

Two appliances and the aerial ladder platform attended the incident. The rope rescue team from Malvern was also put on standby.

Station Manager Phil Russell said; "Rescues of this type can be complex with a building under partial construction and the injured man located on the second floor. The aerial ladder platform provided the quickest and safest option to bring the man to ground level - with the rope rescue team on standby should additional resources have proved necessary."

Fire fighters were able to rescue the injured man on a spine board which was lowered in the cage of the aerial ladder platform. The man was then handed over to ambulance personnel for treatment and transportation to hospital.

West Mercia Police also attended the scene and closed the area during the rescue.