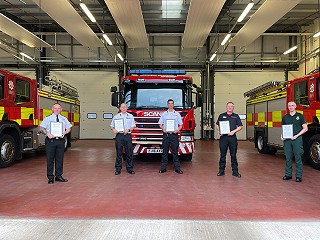 And a Crew Commander received a similar award for his work in locating and then saving the life of a vulnerable missing person in Worcester.

In February near Tenbury Wells, Station Commander Gareth Taylor and Watch Commander Nathan Preece played significant roles in locating a casualty clinging to small branches in floods and in imminent danger of drowning.

They were able to rescue the casualty who then received lifesaving care from Paramedic Simon Clare of HART, who also received a CFO’s Commendation.

The casualty was taken to hospital by air ambulance and subsequently survived.

Back in November 2019, Crew Commander Simon Rudge was part of the fire crew that located an injured casualty and dressed her wounds before briefing paramedics and helping to carry the casualty to a waiting ambulance.