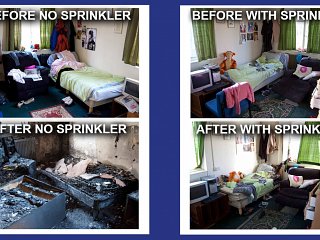 The effectiveness and reliability of sprinkler systems made it an easy decision for Hereford & Worcester Fire and Rescue Service to give maximum support to the National Fire Chiefs Council's (NFCC) National Sprinkler Week campaign.

Research by the NFCC and the National Fire Sprinkler Network (NFSN) found that sprinkler systems operate on 94% of occasions demonstrating very high reliability. Furthermore, it is evident that when they do operate they extinguish or contain the fire on 99% of occasions and so are very effective.

The evidence also showed that in both converted and purpose built flats, sprinklers are 100% effective in controlling fires.

There is disparity in building regulations in regard to sprinklers in the UK. Sprinkler laws in Wales and Scotland are much less lenient than in England which means that their communities have more fire protection.

"Wales and Scotland recognise this and have implemented measures to make their communities safer from fire; we want to see these same changes in England and Northern Ireland as matter of urgency.

"Fire does not discriminate and is just as dangerous in England as it is in the rest of the UK."

NFCC is asking people to support the campaign by following the hashtag #ThinkSprinkler on social media to raise awareness on sprinklers.

The National Fire Sprinkler Association (NFPA) will be holding sprinkler campaigns during this week in America and Canada while Australian FRSs will also be supporting NFCC sprinkler week which runs from 19 to 24 May.