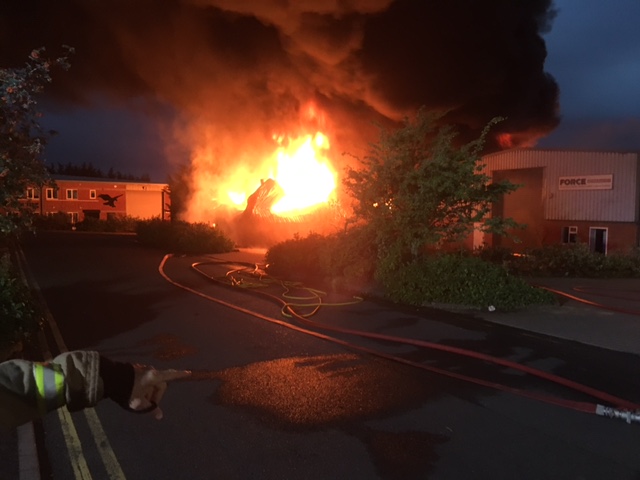 At 18:30 on Monday 19 September, Hereford & Worcester Fire and Rescue Service was called to a fire at a wax recycling plant on the Saxon Industrial Estate in Stoke Prior, Bromsgrove.

On arrival crews were faced with a large building which was fully involved in fire. The fire was also threatening to spread to adjacent units.

In addition to a severe fire crews were faced with other significant hazards including gas cylinders and a running fuel fire.

At its height a total of 15 fire appliances (65 firefighters), including specialist foam, water, aerial, environmental and command units, fought the fire.

In spite of difficult conditions and an extremely intense fire, crews worked hard and managed to contain the fire to the recycling plant and prevent significant damage to surrounding businesses.

Several workers from neighbouring units were safely evacuated and thankfully nobody has been hurt at the incident.

Fire crews will remain on site, working with colleagues from the Police, Ambulance, Environment Agency and Public Health England, to resolve the incident.

Area Commander Keith Chance, who was the incident commander, said: "Due to the swift and professional actions of fire crews, working in a very hazardous environment, we have been able to prevent the fire from destroying surrounding businesses and ensure nobody was hurt."

The cause of the fire is as yet unknown and fire investigation is on-going.