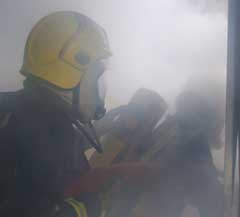 The alert came through just before 4pm and two pumps from Malvern attended.

They then used positive pressure ventilation (PPV) equipment to help clear the smoke from the premises.

Station Commander Neil Lilwall from H&WFRS said: “Early enquiries into this incident suggest that the fire was caused by a cigarette left unattended in the bedroom.

“The fire had already taken hold before it was noticed by the occupants and although they were able to evacuate safely, there was major damage to the bedroom and hall area and smoke damage throughout the property.”

He added: “This incident highlights two important fire safety messages - firstly, that smokers must take care with cigarettes and should never leave them lit and unattended, and secondly, that it’s vital to have working smoke alarms fitted in the home as they really can save lives. An early warning of a fire from an alarm can be the difference between safe evacuation and minimal damage, or far more devastating consequences.”

He urged people never to disconnect smoke detectors that activate while cooking or ‘borrow’ batteries from smoke alarms to use in other battery powered items as by doing so, they put their home, its contents and the safety of their family at risk.