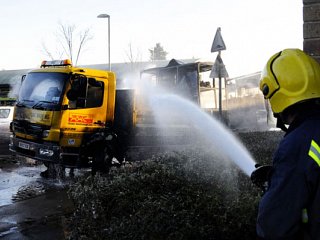 Two appliances from Worcester were first at the scene, and in response to a request for extra support, were soon joined by an additional pump from Worcester as well as by fire crews from Malvern and Droitwich.

On arrival, they found a lorry believed to be loaded with bitumen and LPG cylinders on fire and a nearby two-storey building also at risk of catching alight.

Firefighters brought the fire under control shortly before 4.30pm using two jets and one hose reel and remain at the scene, damping down and ensuring the area is safe.

The lorry was completely destroyed as a result of the fire.

Firefighters praised the university staff for their help in controlling traffic and keeping onlookers at a safe distance throughout the incident.