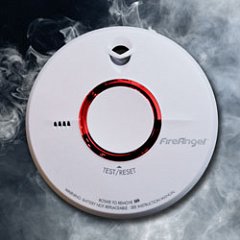 The call was received at around 10.50am and two pumps from Kidderminster attended.

On arrival, firefighters found smoke issuing from the front and back door of the house, and as there was no response to their knocking, they forced their way inside, where they found an unattended pan burning on the kitchen stove.

The fire was quickly extinguished with two firefighters in breathing apparatus, a covering jet and one hose reel used. Ventilation equipment was then used to clear the smoke from the building, and from the adjoining property.

Crew Commander Debbie Davies from H&WFRS said: “The saucepan was severely burnt, and while fire damage was contained in the kitchen, there was extensive smoke logging throughout the house. The neighbour’s house was also affected by the smoke.”

She added: “Without the alert from the neighbour and early intervention by fire crews, this incident could have been far more serious than it was and it highlights two very important fire safety messages.

“Firstly, never leave cooking unattended. Secondly, make sure you have a working smoke alarm installed in your home. Fortunately the neighbour heard the alarm activate and called the Fire Service, but without this early warning, the kitchen or the whole house could have been destroyed. We hope this will encourage everyone to get a smoke alarm fitted themselves and to test it is working on a regular basis.”