On the evening of Friday 18 November, Firefighters and Fire Service support staff from across the county received awards at the annual Herefordshire Medals and Awards Ceremony. The event, which was held at Hereford Town Hall, honoured staff for their outstanding service and commitment to the Fire Service.

The ceremony commenced with the Master of Ceremony, Group Commander Martin Lown welcoming all those in attendance. Long Service and Good Conduct Medals, which were awarded by the Lord Lieutenant of Herefordshire, Lady Susan Darnley, were then awarded to those who have given twenty year's meritorious service. 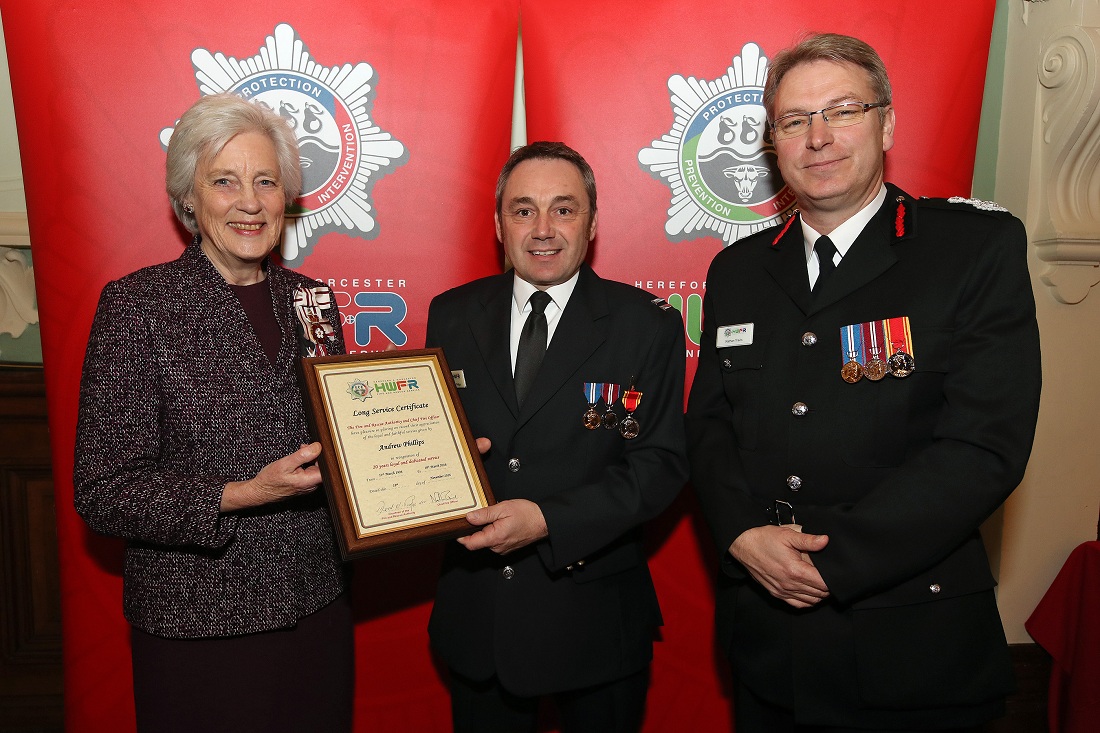 Crew Commander Martin Greaves was awarded with an Outstanding Service Medal for completing 35 years' service and Firefighter John Higgins was presented with a Thirty Years' Service Award; both awards were presented by Chairman of the Fire Authority, Cllr Derek Prodger MBE.

Service Volunteers were also recognised, with the High Sheriff of Herefordshire, Mr Bill Jackson Esq. presenting his own annual award to a Service Volunteer for their outstanding support, enthusiasm and dedication during the previous year. This year's award was presented to Mr Edward Cheshire. Edward has been a community volunteer since March 2015 and volunteered 520 hours to the service and has generated 105 home fire safety checks and 150 smokehouse sessions.

'The Silver Axe' Top Trainee Firefighter of the Year Award was then presented by Chief Fire Officer Nathan Travis to the top trainee firefighter that has scored highly in all areas of their initial training and demonstrated exemplary attributes for the duration of their trainee Firefighter course. The recipient is nominated by the HWFRS Training & Development Centre's Station Commander and was awarded to Firefighter Mateus Glinski from Kidderminster. 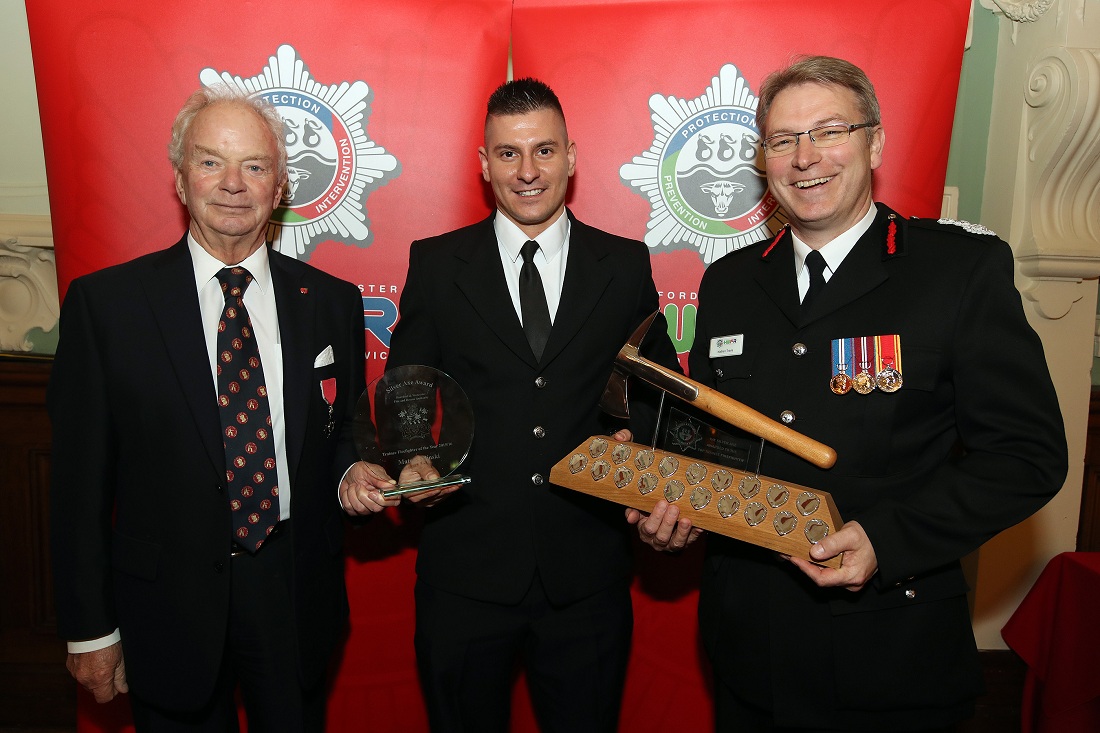 The Chairman's Certificates of Commendation were awarded to Mr Ian Baker, Mr Matthew Davies, Mr Christopher North and Mr Trevor Smith for their continuing support of Herefordshire's Dying 2 Drive initiative which has reached more than 1,500 young people in Herefordshire this year alone.

This year the Chief Fire Officer's Certificate of Commendation was awarded to Community Paramedic Martin Fulloway and Watch Commander Simon Halling for their brave efforts in assessing, diagnosing and treating friend and fellow firefighter at home. Without their quick and thorough team work the outcome for him and his family could have been very different. 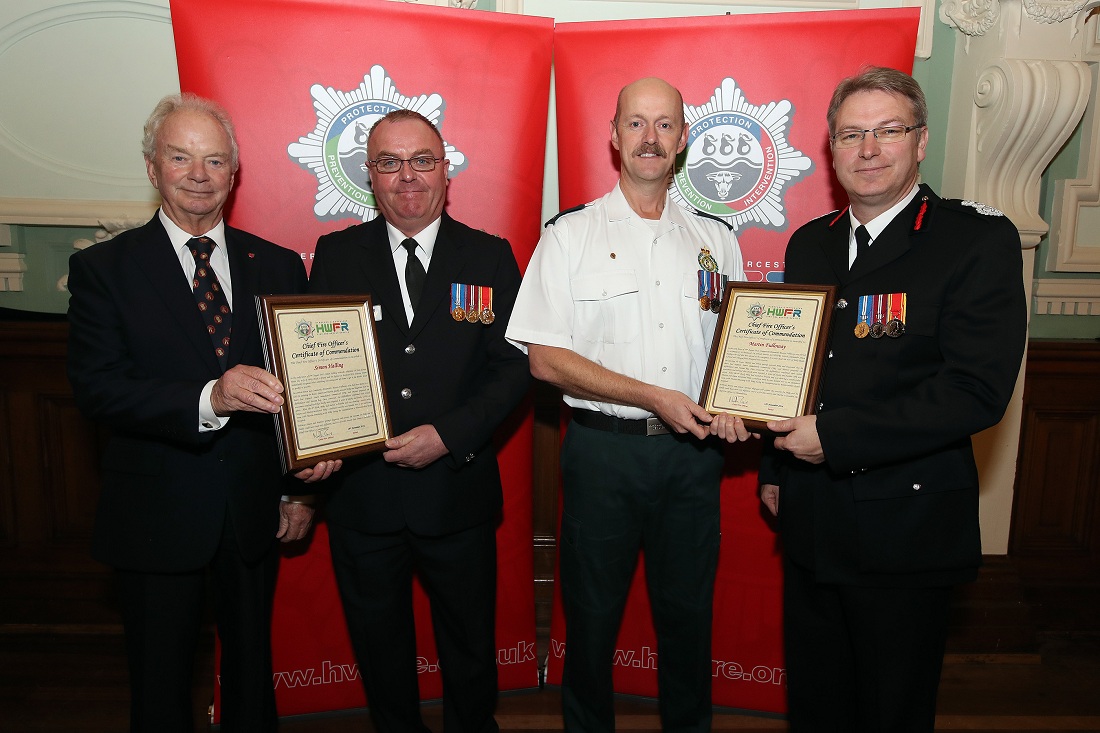 The Chief Fire Officer's Certificate of Congratulations was awarded by the Chief Fire Officer, Nathan Travis to members of the Service and members of the public that meet specific criteria. This year's awards were presented to Watch Commander Jayne Collins, Firefighter Simon Griffiths, Firefighter Pat Murphy, Firefighter Matthew Richardson, Firefighter Dan Gray, Crew Commander Shaun Moser and Watch Commander Adrian Phillips for their impressive top 3 results at the National and World Rescue Challenge competitions in Trauma and Extrication Challenges respectively. Additional to the team, ABT Products Limited's Operations Director, Tim Morris, who sponsored the teams was presented with the award. 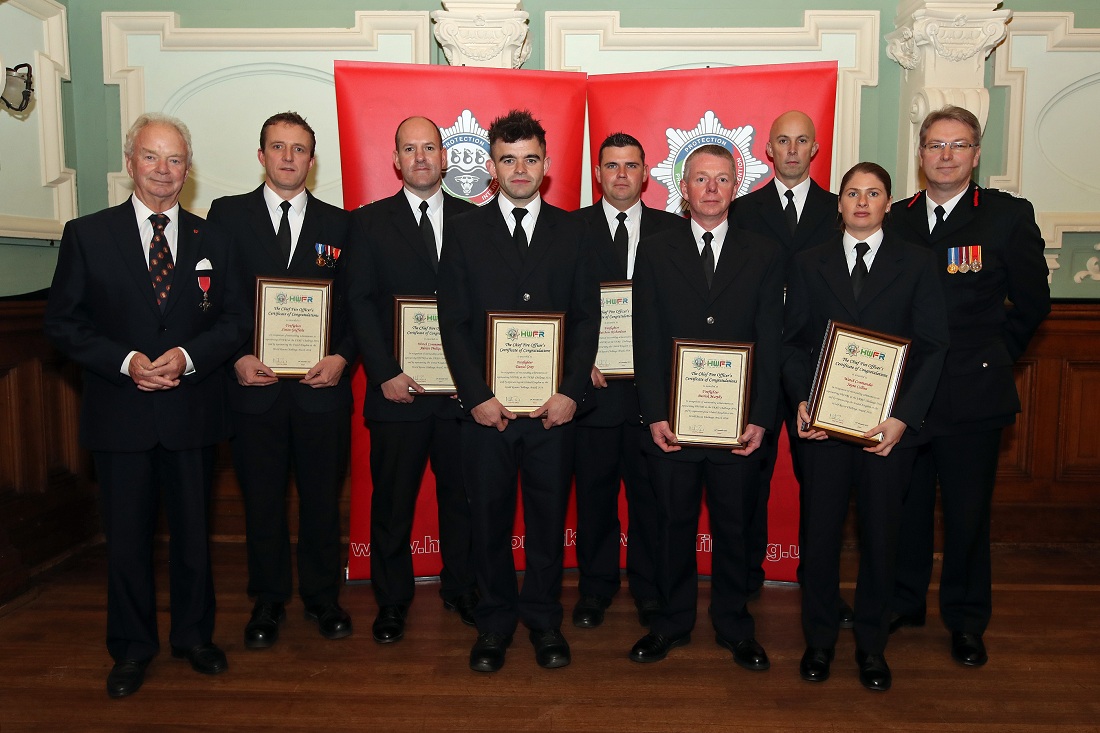 The Fire Fighters Charity presents two awards annually, the first to the Supporter of the Year, which is given to the individual that has made the most significant individual contribution. The award was presented by the Chairman of the Fire Authority, Cllr Derek W Prodger MBE to Mr Ian Baker for his continued time and enthusiasm at various events throughout the year to raise much needed funds.

The second Fire Fighters Charity award is presented to the Station or Department of the Year and was also presented by the Chairman of the Fire Authority, Cllr Derek W Prodger MBE to Leintwardine Fire Station. In April 2015 Leintwardine completed a 24 hour static bike ride (travelling 666 miles at an average speed of 27.75mph) at the station followed by a car wash raising in excess of £2,300. 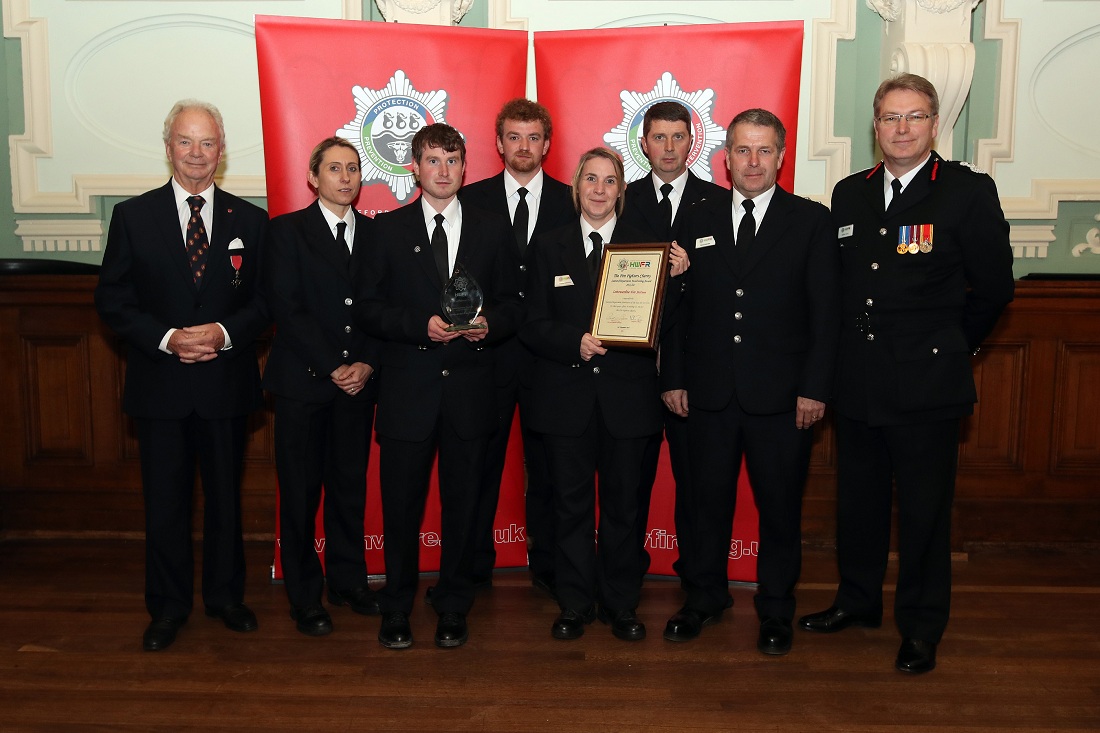 Chief Fire Officer Nathan Travis said: "I was delighted to be part of such a great celebration of the talent and commitment of our staff, I am proud to be a part of the high quality fire and rescue service that we enjoy in Herefordshire and Worcestershire."

He congratulated everyone who received an award, and said: "I'd like to congratulate all recipients for their continued enthusiasm and professionalism in their respective roles. I am already looking forward to next year's awards."