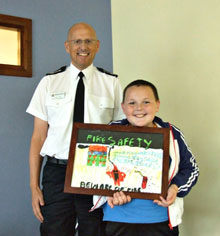 Danny Cave, age 10, a Key Stage 2 pupil at Warndon Primary School, was chosen as the overall winner of the 'Design a Poster' competition, which aimed to promote greater fire safety awareness among children of all ages across Herefordshire and Worcestershire.

The winning entry was selected by Chief Fire Officer Mark Yates at the recent Community Safety Day held at Worcester Racecourse in July, and Danny's prize included a visit for him and his family to Worcester Fire Station followed by lunch at Fire Service Headquarters.

His winning poster design, which was framed and presented to him during his visit, included some key fire safety messages as well as an eye-catching fire devil.

Chief Fire Officer Mark Yates said: "The 'Design a Poster' project is one of many initiatives we run to encourage young people of all ages to think about fire safety. The quality of the designs were impressive in every age category but Danny's stood out as it was so colourful and included slogans showing that he had thought about how to prevent a fire as well as the actions to take in the event of fire.

"It was a pleasure to meet Danny and his family today and we hope they all enjoyed their visit."

Danny Cave added: "We had a visit at our school last year but it wasn't as long as it should have been because there was a fire and the fire engine had to leave the playground quickly to go to it.

"I could remember what we'd been told though and that's how I designed the poster."

An enthusiastic Danny also explained how he had enjoyed the tour of the fire station and seeing all the equipment that firefighters use, and that there was a smoke alarm fitted at his home.

His Mum, Judy, said: "We're very proud of Danny for winning this competition and we've all enjoyed the visit to the fire station."

She confirmed that the framed poster would have pride of place at the family home in Warndon, Worcester, but that at Danny's request, it would not be in his bedroom as he was keen for everyone to be able to see it!