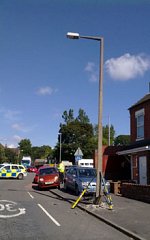 The call about the collision was received at 10.45am on Monday 16 August and one fire appliance from Kidderminster attended, with crews helping to make safe the car which had been in collision with the base of the lamp post.

No one was injured as a result of the collision but two other vehicles nearby were damaged, as well as the lamp post.

The old-style concrete lamp post was leaning at a dangerous angle following the incident and so firefighters used a specialist piece of kit to stabilise the post while they waited for the Highways Agency to attend and remove it.

The StabFast equipment is more usually used to secure vehicles involved in collisions to ensure they stay in position while any occupants are rescued. The equipment, which works on a three stabiliser leg principle, is compact and easy to stow on the fire engine yet can be set up very quickly, helping to protect any casualties as well as those involved in the rescue operation.

Crew Manager Tony Wilks said: "Firefighters were concerned about the stability of the lamp post following the collision, and their use of the StabFast technology in these circumstances showed initiative.

"It was around an hour before the lamp post was taken down and so the surrounding area in Franche Road was certainly made safer in the meantime with this support in place."