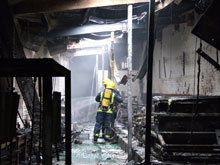 Hereford & Worcester Fire and Rescue Service were called to a serious fire at a factory unit in Kidderminster earlier today (Monday 23 August).

The initial call came through shortly before 8am reporting the fire at Hard Anodising Ltd, an electroplating and metal finishing company located on the Firs Industrial Estate in Stourport Road, Kidderminster.

On arrival, firefighters found a serious fire involving a number of vats and chemicals within the unit but managed to bring the fire under control by around 10.30am.

Two crews remain at the factory in the final stages of damping down with a final inspection due later this afternoon.

Station Manager Dave Williams said: "This was a very serious fire and it was fortunate that the large quantity of thick black smoke it produced was blowing away from other units on the industrial estate.

"Our local risk information was also key to how quickly this fire was brought under control. We have worked closely with Hard Anodising Ltd in recent times to prepare tactical information plans and this pre-planning and the support of the Environment Agency made a real difference, certainly helping to prevent chemicals or any fire water from entering the nearby Staffordshire & Worcestershire Canal."

He confirmed that the Environment Agency have taken samples from the canal already and will continue to monitor the situation.

He added: "The company's emergency procedures also worked well, and there was a tanker on site very quickly to take away the bulk of the contaminated water."

Station Manager Williams also praised officers from West Mercia Police, saying that with the traffic controls they put in place, the disruption to neighbouring businesses was kept to an absolute minimum, with local roads being re-opened as soon as they could be.

Fire investigators are continuing to look at how the fire started but do not believe at this stage that there was anything suspicious.