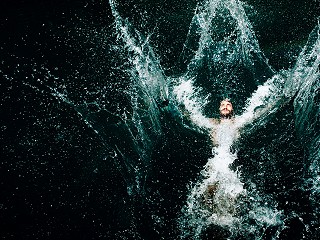 Now that summer is here, Hereford & Worcester Fire and Rescue Service (HWFRS) is warning people about the risks of ‘cold water shock’ from jumping or falling into open water.

In the last 10 years, 38 people drowned in Herefordshire and Worcestershire. Of these, 33 were men aged 17+, and five were women. In addition, an 18 year old man died earlier this month after swimming in a quarry lake near Stourport.

On a hot day, rivers and lakes can look inviting, but the water can be extremely cold just under the surface and cause heart attacks even in relatively young and healthy people. Any water below 15 degrees centigrade can seriously affect breathing and movement, so the risk is still great despite the sunshine.

Stewart Dewar, Station Commander of Malvern and Upton Fire Stations said: “We have some beautiful rivers, canals and lakes in our two counties, but the risk of cold water shock remains throughout the summer months.

“In particular, we are working closely with West Mercia Police and the Malvern Hills District Council to discourage people from attempting to swim in Gullet Quarry, near Castlemorton, in which eight young people have died in recent years. Anyone within the boundary of the quarry is breaching local bye-laws and is at risk of police action.

“We also ask people to take care at night after visiting the river and canal side pubs and bars – organise a lift home, or walk with a friend, but don’t walk home alone near open water.

“Be water aware - enjoy being around the rivers, canals, and lakes, but don’t end up in them on a day or a night out.”