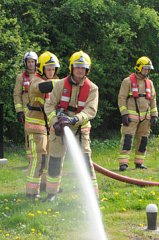 The Service was alerted to the incident at Lower End, Birlingham, at 9.35am and two fire crews from Worcester attended along with a rescue boat from Evesham, the Environmental Protection Unit from Stourport and pumps from Redditch and Upton equipped with specialist firefighting foam (CAFS – Compressed Air Foam System). The fire was brought under control quickly using one jet and a small quantity of foam, although damping down continued for longer. No one was injured, but the boat was completely destroyed in the blaze. Station Commander Phil Griffiths from HWFRS confirmed that the fire started accidentally and was believed to have been caused by an engine or mechanical problem. Avon Navigation Trust was contacted following the incident regarding the recovery of the boat from the water.