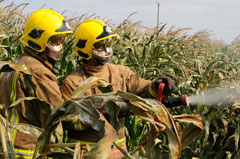 Crews were first called to the incident at 9.21am yesterday morning (Wednesday 24 August) following reports of a large fire at the farm off Hurtle Hill which involved a five-bay Dutch barn and a large quantity of straw, with a field of standing crop nearby.

The first firefighters at the scene found a severe fire involving around 400 tonnes of baled straw. Realising it was already too late to save the straw, their first priorities were to prevent the spread of fire to adjacent agricultural buildings and a large field of maize standing seven foot high nearby.

Extra resources were requested with crews from Stourport, Kidderminster (2), Worcester (3), Droitwich, Malvern and Halesowen (West Mids) attending along with water carriers from Evesham and Leominster, the CAFS (Compressed Air Foam System) from Redditch and the Restricted Access Vehicle from Peterchurch. The Environmental Protection Unit from Stourport and the Command Support Unit from Malvern were also deployed at the incident.

Station Commander Daryl Justice from H&WFRS said: "The urgency of the situation was immediately apparent as there was a very real possibility of the fire spreading to a large field of maize nearby, which would have posed a risk to several residential properties and would have turned it into a very serious and protracted incident.

"Thankfully we had resources in place quickly and crews worked really hard to prevent the spread of fire."

He confirmed that the electricity issues and the presence of farm chemicals stored near one of the farm buildings presented an extra challenge but that they managed to bring the fire under control and start scaling down by around 1.30pm yesterday afternoon.

He added: "While the Dutch barn and all of the hay was destroyed by the fire, crews were successful in preventing the spread to adjacent crops and protecting other buildings at the farm."

Fire investigators are working with West Mercia Police to establish how the fire started.