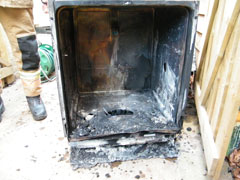 The alert was received at around 3.50pm and Hereford & Worcester Fire and Rescue Service sent along two fire crews from Hereford and one from Kingsland to the address, which was unoccupied at the time. Firefighters in breathing apparatus entered the house and one hose reel jet was used to bring the fire in the kitchen under control. Crews also isolated the power supply at the house and ventilated the property to clear the smoke. There was extensive damage in the kitchen where the fire broke out as well as smoke logging throughout the rest of the house. A faulty dishwasher is believed to have caused the blaze. Station Commander Neil Pigott from HWFRS said: "Fortunately the house was fitted with a working smoke alarm which activated as the fire started. Neighbours heard it, and noticing smoke coming from an upstairs window as well, immediately called the Fire Service. "Their actions undoubtedly saved the house from further damage. As it was, crews found a severe fire in the kitchen as they arrived but we really believe it had the potential to be far more devastating. "We'd urge everyone hearing about this incident to take action now themselves. Check your own smoke alarms are working – and be sure to check them again on a weekly basis. As this incident shows, smoke alarms really can make a massive difference should you have a fire in your home, whether it's occupied or not at the time."