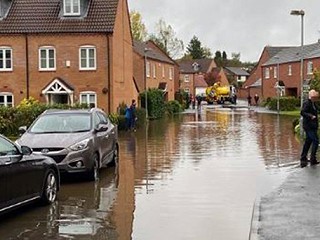 Hereford & Worcester Fire and Rescue Service (HWFRS) has seen a huge increase in operational activity due to the torrential rain across the two counties.

From 09.00 on Saturday 26 October 2019 to 07.00 on Sunday 27 October 2019, HWFRS rescued 70 people from flooding-related incidents, including 64 adults, three children and three teenagers as well as three dogs, three cats and two hamsters.

Fire Crews and the Severn Area Rescue Association visited 56 properties at risk of becoming isolated in Ferry Lane, Symonds Yat following a concern from Herefordshire Council and HWFRS also provided transportation using the Water Response Vehicle for a nurse who was unable to get to a terminally ill patient in Tenbury Wells.

The boat from Evesham was temporarily relocated to the Hereford area due to flooding demands.

The Service remains ready to deal with incidents as they arise but operational activity is now returning to normal levels.