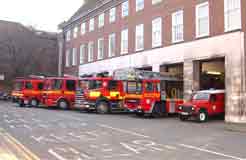 Hereford & Worcester Fire and Rescue Service were called to a lorry fire on the southbound carriageway of the M5 motorway this morning (Wednesday 29 September), between Junction 6 and Junction 7.

The call came through at around 6.10am and three fire crews from Worcester attended.

Station Manager Adrian Moore said: “On arrival, we found that the driver had pulled his articulated lorry onto the hard shoulder, unhitched the burning trailer unit and moved the tractor unit away to safety. The police had closed the motorway due to smoke across both carriageways.

“Two firefighters in breathing apparatus helped tackle the fire which had broken out in the rear wheels and tyres of the trailer unit, which was loaded with bricks. Crews quickly brought the fire under control using two hose reels plus approximately 1,200 litres of firefighting foam, and were able to reposition the fire engines to allow two lanes of the motorway to re-open in time for the worst of the rush hour traffic.”